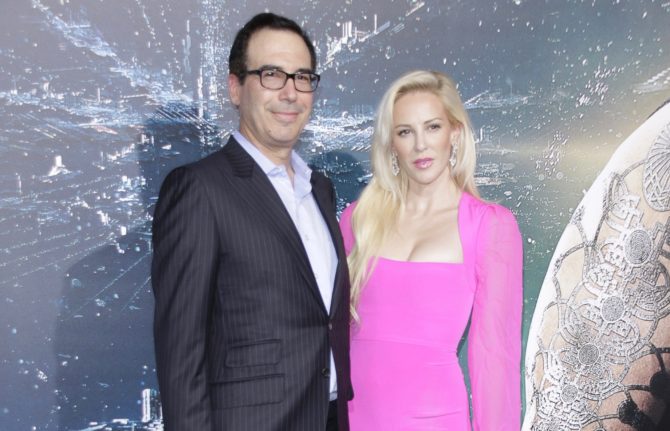 Louise Linton is the wife of Treasury secretary Steven Mnuchin. She became Internet Enemy #1 this week when she decided to mock the poor on social media.

It all started on Monday when the D-list actress/trophy wife posted a picture of herself on Instagram disembarking a military jet emblazoned with official government markings along with the caption, “Great #daytrip to #Kentucky!”

She then hashtagged all the pieces of her expensive designer wardrobe, including #rolandmouret, #hermesscarf, #tomford, and #valentino.

When a mother in Portland called her out for bragging about traveling on the taxpayer’s dime and flashing her extreme wealth, Linton went on an insane tirade calling the woman “adorably out of touch” and telling her to “go chill out and watch the new game of thrones. It’s fab!”

“I’m pretty sure we paid more taxes toward our day ‘trip’ than you did,” she snarled. “Pretty sure the amount we sacrifice per year is a lot more than you’d be willing to sacrifice if the choice was yours.”

Now, at least two of the brands Linton name-checked is doing damage control. Apparently they don’t want to be associated with a classist, classless online troll.

A spokeswoman for Valentino issued a statement yesterday saying that “Louise Linton did not receive any gifted merchandise, compensation or loans from Valentino.”

Tom Ford also said the brand is in no way affiliated with Lipton, nor has she received any free merchandise from them.

Meanwhile, a spokeswoman for Roland Mouret declined to comment on the post. Reps for Hermès could not be reached.

Linton herself put out a curt, less-than-convincing statement apologizing for her atrocious behavior.

“I apologize for my post on social media yesterday as well as my response. It was inappropriate and highly insensitive,” she said.

We’re so glad she sees the error in her ways.

The basic 36-year-old has appeared in such films as Serial Daters Anonymous and Heineken Experience: Brew You, as well as the Lifetime Original Movie William & Kate: The Movie. Her most high-profile role to date was a brief appearance on CSI: NY way back in 2007.