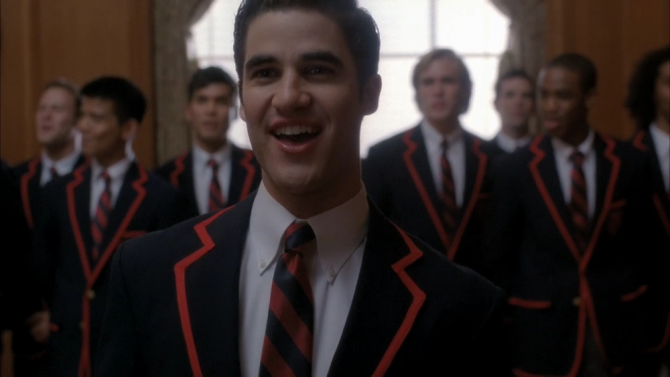 It’s easy to remember Glee as the hot mess it became; we’re still having nightmares about the show’s Thanksgiving-themed cover of “Let’s Have a Kiki” with guest stars Sarah Jessica Parker and Shangela.

Still – in spite of the show’s quirker moments, you can’t dispute that Glee was a cultural fixture that made a point to tear down tired tropes and showcase diverse characters.

As the show’s first season turns ten years old, we looked back at the show’s six seasons to count down McKinley High’s best moments.

10. “Singing In The Rain/Umbrella” by Holly Holliday, Will Schuester and New Directions
(Season 2, Episode 7, “The Substitute”)

Gwyneth Paltrow’s guest-starring slot as Holly Holliday was a bit disjointed, but that didn’t stop the Goddess of Goop from scoring an Emmy for it. This mash-up underscored the show’s ability to create magical mash-ups.

9. “Seasons of Love” by New Directions and Alumni
(Season 5, Episode 3, “The Quarterback”)

The Rent classic soundtracked the series’ most somber moment; after Cory Monteith’s unexpected death, the show killed off his character, Finn Hudson. McKinley alum who had since graduated returned to tribute the athlete (and the actor).

There is no song more synonymous with Glee than this Journey stadium stomper. While the song has been performed six times throughout the series, it’s the original motley crew’s take that is the most cherished. This version sold over one million downloads on iTunes, making it the most successful song of the series.

The pure love between Finn and Kurt (played by Chris Colfer) was immortalized in Finn’s serenade to his new stepbrother with this Bruno Mars hit.

While a majority of the show’s musical arrangements didn’t do much to differentiate from the source material, this acappella take was unexpected, a muted swerve on one of Whitney’s most jovial hits.

This obscure track soundtracked one of the series’ most sensitive scenes: After being bullied for coming out, Dave Karofsky (Max Adler) suffers an emotional breakdown and prepares to hang himself. Thankfully his father finds him just in time, narrowly preventing his suicide attempt. The episode dealt also featured a Trevor Project PSA with actor Daniel Radcliffe.

Let’s be real: Rachel Berry was an ally before it was cool. Lea Michele delivered several stunners throughout the show’s stint, but her rendition of this Babs classic was the ultimate jaw-dropper. Those chops!

It’s easy to make jokes about the later seasons of Glee, but amongst that mess, we met Unique (played by Alex Newell), who is later revealed to be the show’s first transgender character. Her cover of Beyonce’s 2008 ballad is heart-wrenching.

2. “Rumour Has It/Someone Like You,” by Santana Lopez and Mercedes Jones
(Season 3, Episode 6, “Mash Off”)

Santana and Mercedes (Naya Rivera and Amber Riley, respectively) were often stuck playing second fiddle to Rachel Berry, but this knockout one-two punch of Adele classics was one of the show’s biggest highlights. It also came moments after Finn outed Santana as a lesbian, making the song choice of “Rumour Has It” especially fitting.

This scene made everyone, Kurt included, fall in love with the lead Warbler, Blaine (Darren Criss). And unlike many of this show’s love affairs, this one actually lasted – the pair ended up getting married in a super-gay double ceremony alongside Santana and Brittany (Heather Morris).

Related: These are the 20 most important gay anthems of all time