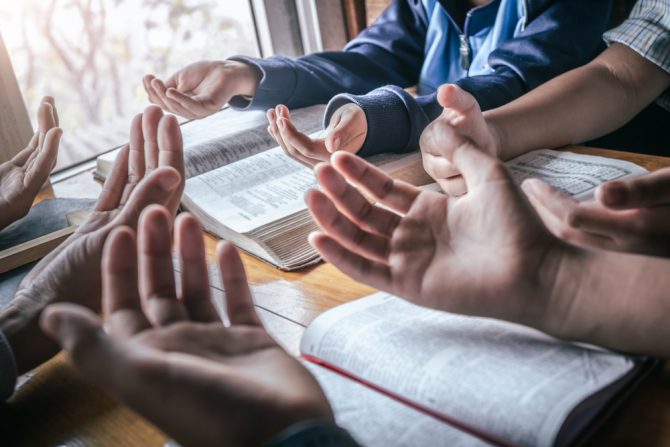 In the beginning, God created the heavens and the earth… and then he created Twitter so bigoted religious organizations could be called out. And boy, is Twitter delivering.

On June 30, queer, Washington state resident, Kent Thomas, called out Young Life, a global young adult ministry whose mission is to “introduce adolescents to Jesus Christ and help them grow in their faith,” for being super anti-LGBTQ+.

Until my early 20s, @YoungLife was my community, family, and home. YL was the center of my life. For that reason, I need to share about the harm YL has done and continues to do to queer people like me. #DoBetterYoungLife (1/8)

The organization claims to stand with those who are “suffering, vulnerable, and marginalized in our communities,” but Tomas says that’s far from the truth.

“Young Life excludes queer people from any sort of leadership position and this is very explicit in their ‘Conduct Policies,’ but it’s hidden away, and not readily available to the public,” he tells Queerty.

“They ‘allow’ LGBTQ+ youth to attend their events and camps, but the moment those youth want to volunteer, their queerness is a major issue and prevents them from being involved any further.”

Case in point: When Thomas went to apply for a leadership position in 2015, Young Life referred him to their Faith and Conduct policy, which affirms the belief that “we are created to experience sexual intimacy in the context of a marriage relationship between a man and woman and those serving in leadership are expected to live within the context of this understanding.”

Over the years, since that incident, Thomas tried speaking with Young Life one-on-one to get them to change their policies (and you know, be less awful people), but nothing seemed to work.

As it turned out, Thomas was not alone in his experiences. After his initial tweet, which used the hashtag #DoBetterYoungLife, people from all over the world flooded Twitter faster than Noah’s Arc with similar stories:

I was in Young Life in high school. I came out to my leaders, and rather than being told I was loved, they prayed God would remove “this demonic temptation of homosexuality from this body.”

Apparently nothing has changed. https://t.co/zdfFlN46GH

A girl called me after an incident involving her coming out. I had to call YL HQ + their instructions were that I
• couldn’t drive her
• take her to camps
• have her in my campaigners group
My AD agreed. I refused + quit right after she graduated High School#dobetteryounglife

#dobetteryounglife
I’m Peyton Mullins. I was involved in YoungLife all throughout high school, especially junior and senior year and planned to be after graduation. I went through high school with YL being my main place. I came out about 8 months ago, and then everything changed. pic.twitter.com/bL83Wonh7r

#dobetteryounglife Young Life made me hate myself deeply. Everything i did that wasn’t in their idea of perfect I was judged for. I never felt like i was good enough. I couldn’t even accept I was Bi until 2 years after I left the group.

It’s taking a lot of courage to share this publicly, and I’m sure I’ll receive some backlash. But these are two of my experiences with Young Life while on staff.

It’s been heartbreaking to read all of the #dobetteryounglife posts today. pic.twitter.com/tLi4JLT2jq

Just as problematic is how Young Life handles race, according to Thomas.

“One [story someone shared with me] in particular described leadership trying to keep white girls and Black girls in separate cabins,” he said.

“The story said a Young Life staff said that ‘having Black girls and White girls in the same cabin was so difficult that it would be best to keep them separate from now on.'”

In another story shared with Thomas, a multiracial group was canceled after leadership deemed them “‘too loud’ and ‘a distraction.'”

With each new story, Thomas feels a combined sense of sadness and empowerment.

“As people who were excluded from the communities we loved, it’s been amazing to find community and a voice with people around the country (and some outside the country) who know how it feels,” he says.

“It’s clear that Young Life can’t ignore us anymore. It’s also breaking my heart. The #DoBetterYoungLife stories are gut-wrenching. Reading all the stories and trying to make sure that those stories lead to change feels weighty and sad. Amist that, it always feels worth it.”

Since starting the hashtag, Thomas is encouraging people to keep sharing their stories both on Twitter and Instagram, as well as emailing Young Life’s leadership and Board of Trustees.

He, along with others, have also started a Change.org petition, calling for Young Life to, you guessed it, do better. As of this writing, the petition has garnered more than 4,000 signatures, and counting.

So far, Young Life has yet to make any kind of statement acknowledging #DoBetterYoungLife, at least publicly.

“The national office did send an email to YL leadership around the country,” Thomas shared. “This email told all Regional Directors and above not to engage with us.”

In the end, “regardless of what Young Life or their donors do, the foundational purpose of this hashtag is for stories of pain to heard and cared about,” Thomas says.

“Isolation only makes pain and suffering worse… So many of us thought we were alone in our experiences. Now, we know we were never alone.”