Sebastian Lelio has arrived and then some.

His film A Fantastic Woman earned him an Acadamy Award, making him the first-ever Chilean director to take home the prize. He followed up with the acclaimed drama Disobedience, starring Rachel Weisz as a Jewish Orthodox lesbian. Now, he works with Julianne Moore in the romantic comedy Gloria Bell, a remake of Lelio’s earlier Spanish-language film Gloria.

Moore herself lobbied Lelio to remake Gloria for an American audience, and the reluctant director eventually agreed, on the condition that Moore herself star. Gloria Bell follows the personal journey of a divorced woman in her 50s. One night out dancing at a singles bar, she meets Arnold, (John Turturro) a neurotic divorcee for whom she has an instant attraction. When the two begin a courtship, they must learn to cope with the baggage of their pasts. Set to a collection of 70s and 80s pop, Gloria Bell also stars Rita Wilson, Brad Garrett, Jeanne Tripplehorn, Michael Cera, and Sean Astin.

We scored a few minutes with Lelio just ahead of the film’s limited opening. Gloria Bell plays in select theatres March 8, with a nationwide opening on March 22.

So I’ve noticed in your four most recent films you focus on women. What’s the source of your love for feminism?

At the beginning of making these four films, I wasn’t thinking in terms of an agenda, or being strategic as far as the themes I was choosing. To be honest, I was following my intuition. There was always something very moving in these ideas. I’d say what they all have in common is they take a character that is at a disadvantage in mainstream narratives, and they put them at the absolute center. Where more standard films say you should be no more than a secondary character these films say you are a film, you deserve a film. Even when that examination that reveals the dark and shadows, they are also an exaltation and examination of these characters. There’s a love letter attitude in the approach. It’s not good for me to over-intellectualize it, but it has to do with the times in which we’re living, and maybe the intuition that femininity needs to be observed and celebrated. Films built around women seem to be necessary and urgent. 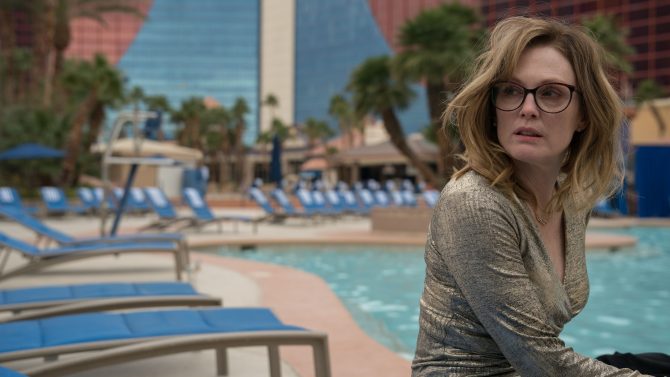 You’ve already amassed a gay following. Gloria is a character that I think a lot us will identify with.

In another interview, I heard you make a powerful statement. “Any time artistic freedom is menaced, it’s hiding the smell of fascism.” I think that’s a telling statement from a man who grew up in Latin America during a time where several nations there existed under fascism. You’ve also applied that idea to representation and diversity in films. Would you extend that to the sentiment that only gay actors should play gay characters?

Now pardon my asking: Do you identify as straight?

Ok then, so my question is, for you as a straight man, how do you then, as a director, work to ensure authenticity that you’re being true to the experience of a woman and the LGBTQ community?

This is the thing that interested me. I think that this discussion is very alive, and I feel it vividly here in the United States. It’s really in the air. It’s quite urgent. It is so because it is deeply connected with the counter-side of what this discussion is trying to protect. These are dangerous times we are living in, but the trick is that when advanced, informed, well-read, cultivated, rebellious sectors of society are the ones that start saying, “Don’t do this, don’t do that.” When that comes as an imposition, I have a physical reaction against it because I think artistic freedom a great value to society. We should aim, of course, in the direction of increasing the accessibility of different sectors of society that haven’t had the opportunity to direct, or act, or perform in the film industry, to allow them to win more representation or space.

But, I am against installing any policy that is prohibitionist. It’s really kind of an infantile discussion to even suggest that a straight, cisgender man could not have the right to make a film about gay people, for example. Or the other way around: For a gay woman to talk about a cisgender male politician, for example—and I’m saying this because I’ve heard these complaints from some people in relationship to Disobedience. It’s very important to speak out, I think because things can get very confusing when the people who are trying to impose this are the people that that should be expanding the limits of what is possible. I have the feeling that there is a tendency in general, in the world—Bolosnado, Brexit, Trump, etc—that is aiming toward the idea of a world built around segregation and separation. Building walls, imposing fears, heading in the direction of you relating only to your race, your class, your color. That’s not the world I want to live in.

And I think art should run away from that, from anything close to that attitude. So I understand cinema can be a bridge that can allow me, as a creator, to root out or connect with someone that I’m not. I am not a 58-year-old woman. I’m not transgender. I’m not a Jewish lesbian. But in the process of making those films I’ve learned a lot. I think I have grown as a person, and hopefully, some people have expanded the inner limits of their empathy while watching those films that will hopefully offer enough space on a human level with these characters. 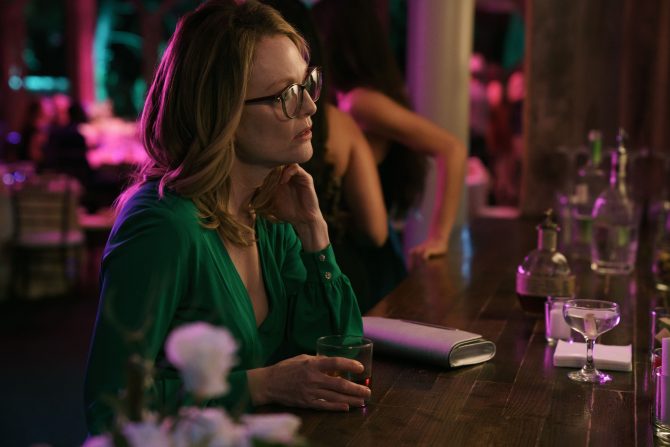 Gloria is a remarkably empathetic character. One of the beautiful things about her is that she doesn’t let all these setbacks drag her down. That’s a recurring theme in much of your work: resilience.

I’m attracted to characters that somehow have to stand up against strong forces. Those forces could be coming from outside, or they could be coming from inside themselves. This idea of having to move onto the next level implies a fight, a struggle. At some point, these are stories about characters who have to disobey, either what the community is commanding, or what they think the truth is. That is a beautiful process that can, at times, be violent. It can be liberating. But it’s always about connecting with who you really are in order to find the strength in order to break through to the next level of understanding in your own self, and of what’s possible. That creates a certain amount of pressure around the character, and when you put pressure around the character, you can see what they’re really made of. So it’s very revealing.

It also makes for a great climax. In Disobedience, that’s the memorial scene. In A Fantastic Woman, it’s the scene where Marina jumps on the car. In Gloria Bell, it’s the scene with the paintball gun.

I just love the idea of defying expectations when it comes to building a narrative so you don’t really know where the story is headed. You’re hopefully lost in the sensual experience of watching these characters who are hopefully so vividly portrayed that they seem to be people and not characters. Then, without noticing, you’re suddenly witnessing these explosions, and it’s quite cathartic for the audience as well. So it’s what the film is exploring and the character is understanding can really resonate with the experience of the spectator because they are experiencing the film in a very strong way. They can come to those places of liberation as well.

In Gloria, music plays a very important role in terms of the score, and in terms of pop music, what you select for a character or a scene. How do you go about collaborating with a composer, or selecting songs with a music supervisor to fit with a scene or a character?

Well, I agree. I think the first Gloria was kind of a hidden musical, but Gloria Bell, it isn’t hidden.

It’s really explicit. Every two or three minutes a new song comes in, and someone is either singing it or dancing it, and somehow the emotion of that music resonates with her journey. That’s not too dissimilar to the operation that a musical film uses. 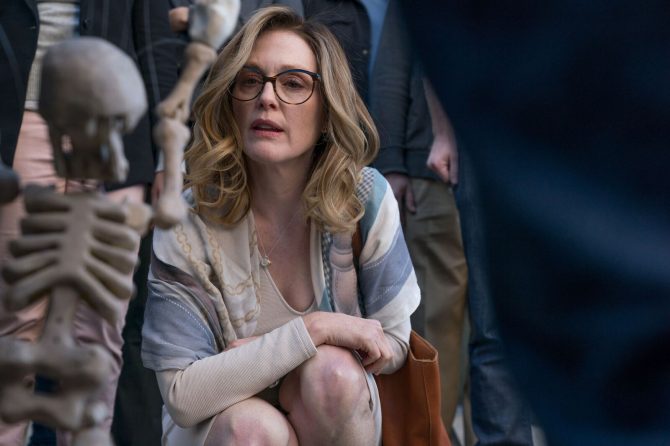 So for me, it’s a great pleasure to find out what those songs are going to be and to create a balance between all of them, kind of like a musical narrative that crosses the entire film. It’s not easy to do, because music is really expensive, and you want to create an interesting combination with songs that are well known, and songs that maybe aren’t well known. Songs that are famous, but you can recognize them anyway. You want them all to have strength and power and beauty. I have to say the musical approach is not cynical. These are songs that we are not laughing about. They are put there because I love them for different reasons. One of the main reasons for Gloria Bell is that on top of all this music and very vibrant playlist, it has a score also. So this version has a lot of music, and a score by Matthew Herbert, a British musician who came up with this idea that Gloria has a disco ball in her heart.

That’s where the score comes from. By the way, I just want to say that my films being received well in the gay community is an honor, and it’s really exciting.

Gloria Bell plays in select theatres March 8, with a nationwide opening on March 22.