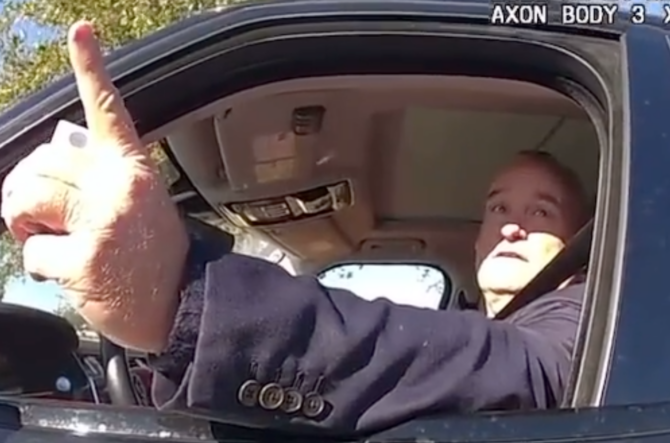 A speeding ticket is the least of congressional candidate Martin Hyde’s worries after footage of him interacting with a police officer has gone viral.

The British-born, Florida Republican, who is is running to represent the state’s 16th Congressional District in the U.S. House, was pulled over on Valentine’s Day for driving 57 mph in a 40 mph zone while texting on his phone.

Michael Flynn and Roger Stone backed congressional candidate not backing the blue in new traffic stop: “I’ll just call your Chief. You know who I am, right? You’re going to do this? Big mistake. You’re making career decisions.” pic.twitter.com/4GUfuKPvN4

“Do you know who I am?” Hyde asked Beskin, before threatening to personally call the police chief. “This is going to end your career,” he told her.

In the second part of the video, Hyde asks, “Is it your Russian immigrant status that makes you treat people like this?”

Part 2: “I just called your supervisor. Is it your Russian immigrant status that makes you treat people like this?” pic.twitter.com/9mhyFVSVCb

Records show Hyde was ultimately just cited for failing to display proper registration, but we imagine the $116 ticket won’t sting quite as much as the public response.

You are a disgrace. The nerve of you to pretend to some sort of special privilege based on being a “candidate”. https://t.co/sokZelpNeo

It’s clear WHY Martin Hyde wants to be in office – for his own personal power plays.
He’s got a strong “I’m above the law, peasant” vibe going!

We know EXACTLY who you are now Martin Hyde.

Martin Hyde is an a**hole. For a simple traffic ticket he wants to be above the law. It is a way of life for these a**holes.

Yes, that officer is a hero. She made a career decision. Give her a raise and a promotion.

Play this video to train every cop.

Nobody is above the law. https://t.co/P3ETV2sDe4

As Hyde started Trending, some commenters used the opportunity to remind everyone of that other time he behaved horribly.

Back when the businessman was running for City Commission in 2019, he got into an altercation with a group of Puerto Rican teens at a tennis club. Hyde allegedly told the Spanish-speaking teens to quiet down and “go out and cut the grass.”

This is Republican, Martin Hyde, flexing his racist rhetoric on Spanish-speaking children at a tennis club in Sarasota. He was kicked out and his membership canceled after this. Be careful how you vote. https://t.co/CbmcIzDHbD