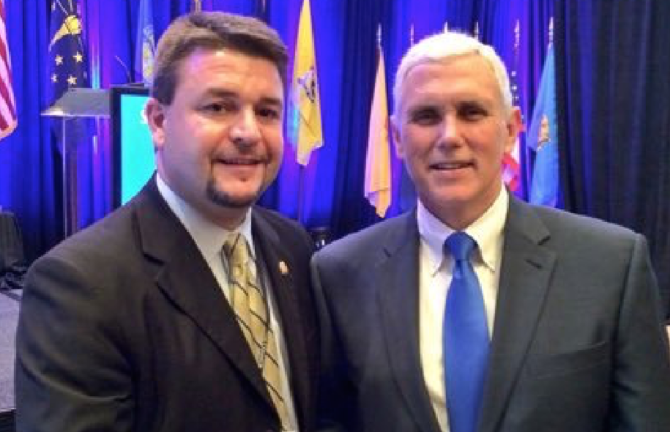 A Republican official has taken to Twitter to bully someone — where could he have picked up such a smarmy tactic? The world may never know.

But since Arkansas State Senator Jason Rapert (left, next to Mike Hot-Pence) doesn’t quite have the same dubious clout as his more famous troll-model, he may be regretting his choice to publicly attack one of his former constituents on Twitter.

Rapert’s skirmish started last week after he filed a bill in the Arkansas State Senate to amend the U.S. Constitution to define marriage as a union between a man and a woman. We could argue that anyone still fighting that hard against marriage equality in America is likely coping with some intense unexplored same-sex attractions, but that’s for another post.

Suffice it to say that not everyone Rapert claims to represent shares his eagerness to turn back the clock on LGBTQ rights, including Michael Hildebrand.

Hilderbrand, who grew up in Arkansas and whose family still lives in and around Little Rock, sent Rapert a message on Facebook, hoping to reach the senator with some reason. Here’s how their exchange played out: 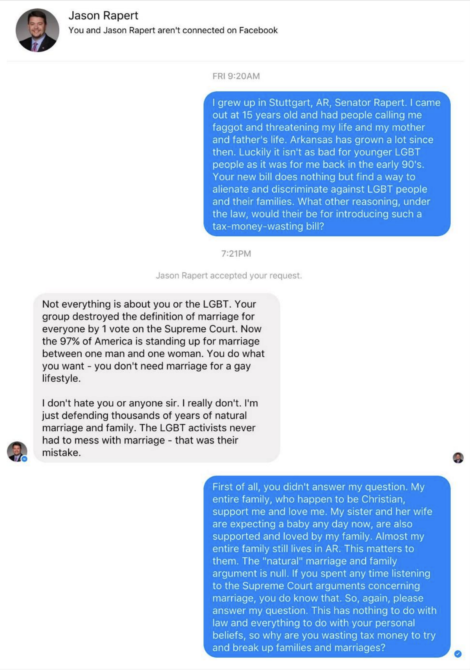 “You don’t need marriage for a gay lifestyle,” Rapert told Hilderbrand. Funny — we didn’t realize marriage was a necessity for a heterosexual lifestyle, either.

“The LGBT activists never had to mess with marriage – that was their mistake,” he concluded. Right, kind of like how civil rights activists just had to go meddling with interracial marriage laws.

Hilderbrand never received a response to his followup message, so he posted the exchange online, hoping to spark discussion.

As local political blog the Blue Hog Report notes, Rapert apparently wasn’t keen on his own words being used to paint a picture of his close-minded ideology, so he blocked Hilderbrand on Twitter.

Then after blocking him, Rapert posted screenshots from Hilderbrand’s Facebook profile to another activist’s account (@AltHomesteadMon) in an attempt to… discredit him? shame him? We really can’t figure it out ourselves.

@AltHomesteadMon he seems like such a nice person. #Not
You can’t post vulgarity and then whine when you get told the truth. So ridiculous. pic.twitter.com/RgXUFzJKTa

#Not? Good one, Senator. Also, you can’t really pull the “vulgarity” card when you are actively working to strip your fellow citizens of their rights.

Rapert followed up the Tweet with some more of his trademark wisdom, citing a page literally out of the Family Research Council (deemed a hate group by the Southern Poverty Law Center) playbook:

The Bible’s Teaching on #Marriage and #Family: https://t.co/svYxZ4YnmH @FRCdc #Now

BHG decided the only fair thing to do was post Rapert’s phone number and other publicly available, easily Google-able information, so people could let him know what they thought of his narrow views.

Others encouraged the same actions, and that’s when this started to happened:

Apparently @Jasonrapert has a full voicemail box. DO NOT LET THAT STOP YOU. #RAPERT #RESIST

.@jasonrapert is a coward who can’t debate, just blocks those who dissent. Homophobic racist bigot who solicits donations to his church.

Hey .@jasonrapert, want all of this to stop? PUBLICLY apologize to the person you doxxed, and answer their original questions. Or… pic.twitter.com/IE5ZjKaZaw

Rapert’s bullying tactics might have worked in the past, but if he hasn’t noticed by now, people are pissed off and ready to resist. Perhaps he’ll reconsider targeting the rights of his fellow Americans after the onslaught of complaints he’s still receiving.

This sums it up pretty well:

IF YOU DO NOT MAKE ROOM FOR EVERYBODY AT YOUR TABLE, DO NOT BE SUPRISED WHEN THEY COME FOR YOUR CHAIR. #RESIST #altgovt