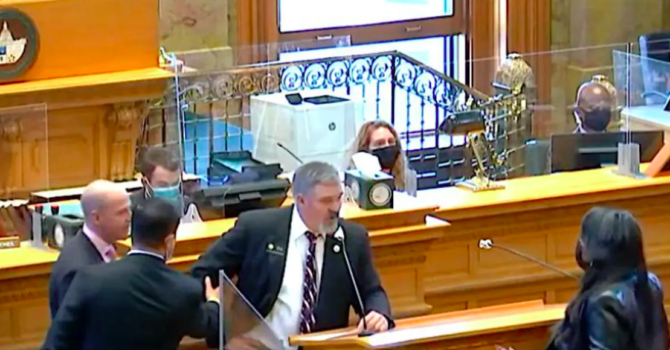 A Republican state lawmaker from Colorado who calls Black people “Buckwheat” and gay people “homosexuals” says his colleagues really ought to be more respectful toward one another.

State Rep. Richard Holtorf was talking about military rules of engagement and the law of proportionality yesterday on the House floor when he called one of his colleagues a racist slur.

“Don’t worry, Buckwheat. I’m getting there,” he said, adding, “That’s an endearing term, by the way.”

(For the record: “Buckwheat” is not an “endearing term.” It’s a racist term that references Buckwheat, the Black caricature from The Little Rascals. Learn all about it here.)

“I, in college, had a friend who was an African American and he was a homosexual, and we were good buddies,” he reportedly told her.

It’s unclear who Holtorf was directing yesterday’s “Buckwheat” comment to, but Rep. Leslie Herod tweeted later in the day: “This is what I have to deal with Every. Damn. Day. #onwepress.”

This is what I have to deal with Every. Damn. Day. #onwepress https://t.co/oXfwEPAxt4

Holtorf later half-apologized to his colleagues for the racist comment, saying “we all have to do better.”

“I apologize if I’ve offended anybody in anyway. It is not my intent, ladies and gentlemen. If anyone would like to talk to me afterwards, I’d be more than happy to visit with them.”

When asked about the remarks by local media, Holtorf simply said, “There is two sides to every story.”

In this particular case, there’s the racist side and the not racist side.