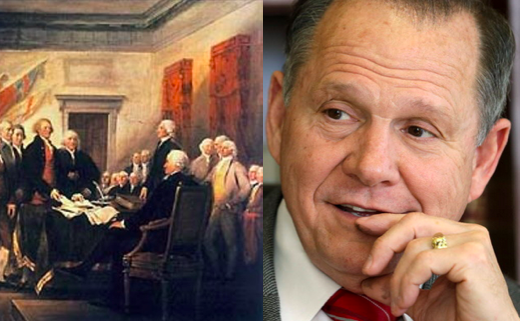 Only in Trump’s America could a disgraced former judge have a shot at a seat in the US Senate. But that’s exactly what’s happening in Alabama.

Roy Moore was ejected from his role as Alabama’s Chief Justice after abusing his authority by blocking gay weddings in the state after the historic SCOTUS ruling in June 2015. Now, he’s running for the US Senate seat vacated by Attorney General Jeff Sessions. Not just that, but it looks like he might win.

Up until now, Moore has enjoyed a strong lead over his GOP primary opponent. But that may soon be changing. Or it may not. We’ll see.

This week, it was revealed that Moore has close ties to extremist pastor Kevin Swanson. You know, the guy who said he’s rather smear poo all over himself than attend a gay wedding and who once called for LGBTQ  people to be put to death.

CNN reports that Moore has appeared multiple times on Swanson’s radio show. Not just that, but he shares extremist views.

Moore appeared on Swanson’s show at least five times, possibly more. His most recent appearance was in February 2017, long after Swanson’s “kill the gays” comments. In nearly all the appearances, the two guys rallied against the “gay agenda.”

CNN also unearthed a 2015 interview in which Moore refused to clarify whether he supports putting gay people to death.

When asked if people should be executed for having gay sex, Moore thought for a moment, then replied: “Well I don’t, you know, I’m not here to outline any punishments for sodomy. That’s far beyond any issues I’ve come in contact with. I can’t help what some people say, what some people do.”

In 1776, slavery was also legal and women weren’t considered equal human beings. A lot has changed since then.

Moore will face off against challenger Luther Strange in a GOP run-off election later this month.

Related: Alabama is getting ready to send us the most homophobic Senator since Jesse Helms