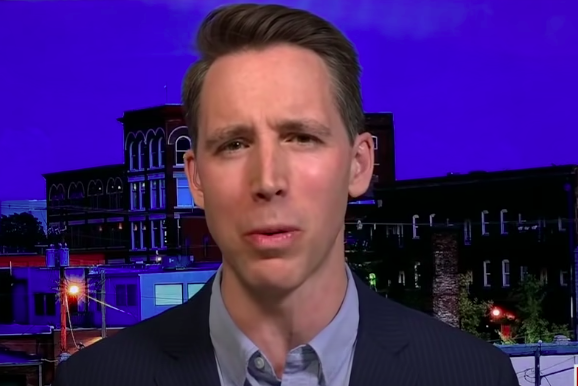 This just in: Senator Josh Hawley of Missouri is a total drama queen. And a liar.

The antigay senator took to Twitter yesterday to claim a violent mob threatened his wife and newborn outside their home in Washington, D.C. in the very late hours of the night.

In a dramatic tweet, Hawley, who has vowed to do everything in his power to stop Joe Biden from being inaugurated on January 20, alleged angry protesters “screamed threats, vandalized, and tried to pound open our door.”

“Let me be clear: My family & I will not be intimidated by leftwing violence,” the 41-year-old religious freedom fighter said.

Tonight while I was in Missouri, Antifa scumbags came to our place in DC and threatened my wife and newborn daughter, who can’t travel. They screamed threats, vandalized, and tried to pound open our door. Let me be clear: My family & I will not be intimidated by leftwing violence

But here’s the thing: What Hawley claims happened never actually happened. At least, not according to footage from the incident that was later shared on Twitter.

Photos and videos show about a dozen or so perfectly peaceful protesters gathered for a candlelight vigil in the street outside the residence. Most of them remained off the property, although at one point a group of about four people did calmly approach the front door and ring the bell.

A woman, presumably Hawley’s petrified wife, could be seen inside peeking out the window, though she didn’t answer the door.

Violence? What violence? There is literally a cop sitting there. Stop being a drama queen Josh. https://t.co/1YysuFfgIf

Hawley recently found himself at the center of widespread criticism from both Democrats and Republicans after he announced his plans to contest the count of the Electoral College vote during a joint session of Congress tomorrow. His challenge is widely expected to fail.

Related: Rand Paul pissed authorities won’t investigate murder attempt against him that he clearly made up

This family hit the road in an RV for the first time. It changed their lives for the better.