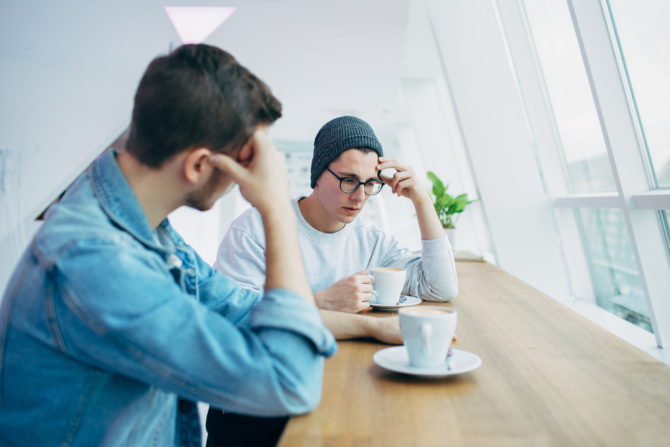 A Reddit user who got a coworker filed for harassment years ago said he was working at his new job recently when he ran into his former harasser, who took the chance encounter to own up to his misdeed.

“We were cordial, and he also said, ‘You did the right thing. Wanted to let you know that,’” the guy wrote on the r/askgaybros subreddit. “This was a former friend as well.”

In a comment on a different subreddit, the user described his ex-friend’s harassment: “[He] persistently wanted to get with me. He wasn’t physical or graphic with his intentions, but always was frustrated that I kept rejecting him. Didn’t know how to take no for an answer.”

Related: Is this guy wrong to reject his former homophobic bullies’ apologies?

Anyway, back in his original post, the Redditor said that he nodded in response to the other guy’s comment and said he appreciated it, and the two of them caught up briefly.

“We wished each other well after the transaction was made,” he wrote. “For a long time, I was really bitter towards him and didn’t think he would learn, but I’m happy for him that he did. If he comes back to my store, I’d be fine with that going forward. I honestly think he was afraid to talk to me too given that it was a big falling out.”

Commenters on the post appreciated the story, with one saying it made their day.

“He has taken responsibility and forgiven himself. And he has balls,” another person commented. “Seems like a perfect ending for what must have been a terrible time for you.”

And a third user wrote, “You have to admire when the wrong party so directly references the climactic incident. He seems to have evolved, and I give you kudos for remaining civil, despite the underlying possible triggers. Stories like this give me hope for mankind’s future.”