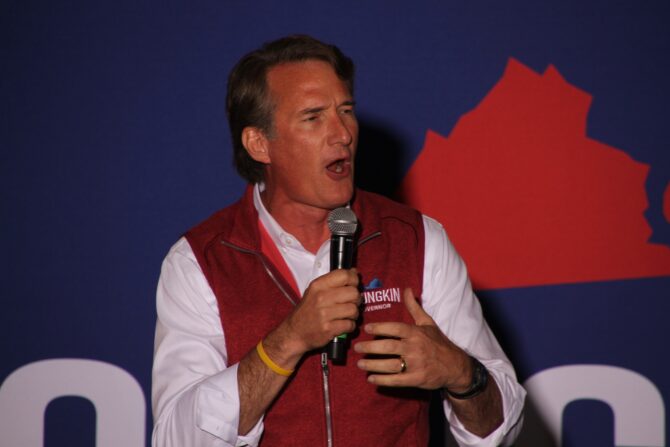 Governor Glenn Youngkin of Virginia is having a hell of a week and he has nobody to blame but himself.

It all started on Saturday when the antigay Republican’s campaign attacked a 17-year-old on Twitter, doxing the minor by sharing his name and photo after he called out Youngkin for trying to erase history.

The high school student retweeted a news story that suggested Youngkin was quashing efforts pursued under two previous governors to highlight the history of enslaved people at the governor’s mansion.

Related: Jerry Falwell Jr. wants Virginia to secede to a different state where people can be more homophobic

“Team Youngkin,” the official Twitter account for the governor’s campaign, quickly went on the defensive by posting a photo of the teenager with former Gov. Ralph Northam at a Democratic fundraiser last October.

“Here’s a picture of [teenager’s name] with a man that had a Blackface/KKK photo in his yearbook,” the campaign tweeted, along with the October photo alongside a racist picture from Northam’s 1984 medical school yearbook that resurfaced in 2019.

Almost immediately, people called Youngkin out for doxing a minor and promoting “a culture of toxicity”. Team Youngkin eventually deleted the tweet, but not before every major media outlet had already covered the story.

Speaking to the Washington Post over the weekend, the teenager said, “A governor’s campaign account has attacked a minor – to me that was a new low … it was up for over 12 hours. I received no apology, no communication, nothing.”

Related: GOP candidate Josh Mandel just mocked a queer teenager on Twitter because of course he did

Then yesterday, two days after the tweet had gone out, Youngkin finally issued a statement, blaming the whole thing on a staffer who he claims wasn’t authorized to tweet from the account.

“On Saturday night, an unauthorized tweet came from a campaign account,” he wrote. “I regret that this happened and it shouldn’t have. I have addressed it with my team. We must continue to work to bring Virginians together. There is so much more that unites us than divides us.”

On Saturday night, an unauthorized tweet came from a campaign account. I regret that this happened and it shouldn’t have. I have addressed it with my team. We must continue to work to bring Virginians together. There is so much more that unites us than divides us.

While running for governor in 2021, Youngkin largely avoided talking about LGBTQ issues, although he did tell the Associated Press that he feels “called to love everyone.” When asked whether he supports for same-sex marriage, however, he said no then abruptly ended the interview.

Related: Obama calls out GOP: “Are we still arguing about gay marriage? Really?”

Afterwards, President Obama, speaking at a rally for Youngkin’s Democratic opponent, Terry McAuliffe, said, “Are we still arguing about gay marriage? Really? I thought that was pretty clearly the right thing to do.”

Here’s how people are responding to Youngkin’s non-apology…

That’s a pretty crappy apology to a 17 year old.

Can you name one thing you’ve done in your first month in office that helps bring people together?

Attack a 17 year old does nothing to “bring Virginians together.”

You should be embarrassed, Governor.

Does regret constitute an apology?

Remember this tweet? So who is being fired? https://t.co/0c0UXCLPpl

You do realize that at no point did you ACTUALLY apologize or accept personal responsibility right? The part you ACTUALLY regret is getting publically called out as a bully. We see you.

You’re simply upset you’ve been called out. And now are taking no responsibility or offering a suitable apology.

Where is the apology for the attack on a teen? Your son purposely tried to vote twice, and you wanted everyone to leave him alone. You have staff that should be fired for this attack on Ethan, but they really are just a reflection of you, aren’t they?