This is the third in a series of “Then & Now” articles looking at historic places that have made New York the cradle of LGBTQ life from Stonewall to today at Pride 50.

Stonewall Inn gets all the glory, but it’s hardly the only gay bar in Greenwich Village that was the site of groundbreaking activism. This former speakeasy at the corner of West 10th Street and Waverly Place began attracting gay men in the 1950s, making it the city’s oldest continuously operating gay bar. But the story of how it earned that distinction is, of course, complicated.

In the late ’50s and early ’60s, the bar’s management was openly hostile to its increasingly gay clientele taking over the stools, jukebox, and pool table. Bartenders often refused to serve those they assumed were gay, citing New York’s laws against serving disorderly patrons. But the 1966 “Sip-In” staged by members of straight-laced gay rights organization the Mattachine Society led to a New York court’s affirmation of homosexuals’ right to drink in peace. And many of us have been drinking—peacefully and not-so-peacefully—in legal gay bars ever since.

Over the years, Julius has been featured prominently in several films, including The Boys in the Band, Love Is Strange, and most recently Can You Ever Forgive Me? It was a favorite watering hole of Tennessee Williams, Truman Capote, and Rudolf Nureyev. And in 2016 it was listed on the National Register of Historic Places due to its significance to the founding of our community. 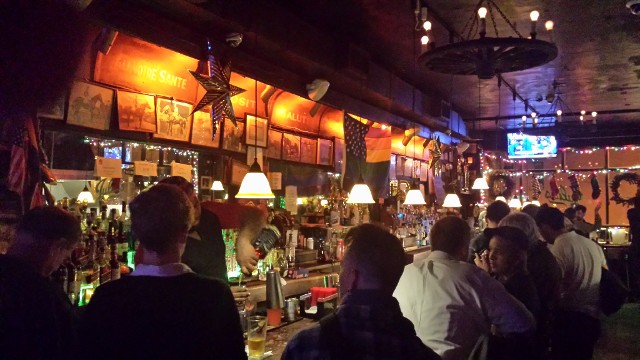 Craving a chill drink in a cozy bar? Hit up Julius. These days, the place looks its age. As noted in the New York State Office of Parks, Recreation and Historic Preservation’s letter deeming it eligible for listing on the National Register of Historic Places, the bar’s interior has remained virtually unchanged since the 1960s. You can sit at the same bar top where Mattachine leaders staged their sip-in and plotted the radical future.

But its vintage, unfussy charm – not to mention its history – is what draws people to Julius. Also the burgers. Did we mention the burgers? The bar has the distinction of being one of the only gay bars in New York with its own in-house short order grill serving up what are actually some of the best burgers you’ll get anywhere in the city. Anyway, after a few G&Ts, the burgers, and the boys, are absolutely perfect.

“Queerness isn’t just Lady Gaga and overpriced drinks and fauxhawks,” Mitchell told the New York Times in 2010. “Our feet are planted in the real world, but we dance with angels and ghosts.”