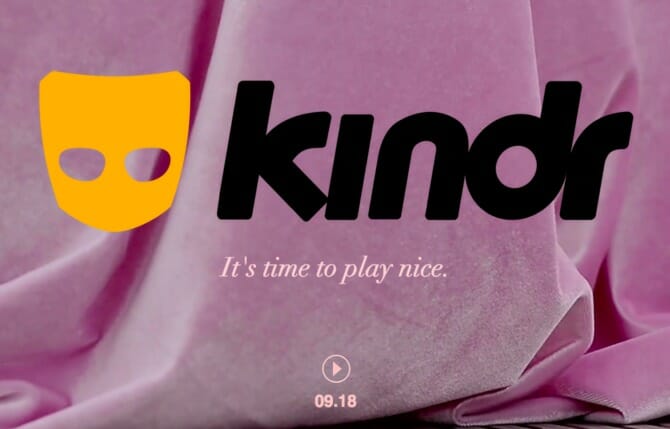 With founder/former CEO Joel Simkhai out, the folks over at Grindr finally seem ready to tackle the issue of sexual racism and bullying among users.

Simkhai left the company earlier this year. Last week, the hookup app tweeted a video about sexual racism, which states: “When someone says something like ‘I don’t date black people’, that’s all black people, that’s what I refer to as sexual racism.”

The tweet also included a link to kindr.grindr.com. When a person visits the site, a voiceover about sexual racism plays alongside a tagline that reads “It’s time to play nice” and a launch date of September 2018.

In many ways, Simkhai promoted the sexual racism Grindr has become notorious for.

In 2016, he told Broadly, “To say, ‘I’m only into black guys’—is that a bad thing? I think we should allow you to say that, because that’s your preference.”

In 2014, he told the Independent he’s OK with people being racist, so long as they give it a positive spin. “We encourage users to state it in a positive way,” he said, adding, “I’m not going to solve racism.”

The announcement about “Kindr” comes just days after model/activist Munroe Bergdorf called on the app to address hate speech.

“Grindr has the resources and potential to become something positive and inclusive for the LGBTQ community in the future,” 30-year-old Bergdorf wrote in an Instagram post. “I just hope they make the necessary changes to do so.”

Thank you to everyone who trusted me with your experiences of abuse. Grindr has the resources and potential to become something positive and inclusive for the LGBTQ community in the future. I just hope they make the necessary changes to do so. I'm looking forward to discussing this at length with them next week. Well done to everyone who tagged them in the comments, community strength! ??

Bergdorf also shared screenshots of conversations fans have shared with her, which demonstrate the daily abuse they suffer for being black.

“R u white,” one screenshot said, “no cotton pickers,” another read.

Just got off the phone with @Grindr to discuss the ways in which they will be working to stamp out sexual racism, transphobia, religious intollerance and body shaming going forward.

I can't disclose what form this will take, but I am very encouraged to hear how the app will taking steps to become a safer more inclusive platform for ALL.
They will be making a formal announcement of the changes in early September.

It remains to be seen exactly what Grindr has in store with “Kindr” or if it will be successful, but it’s definitely encouraging to see the company finally–finally!–accepting some responsibility for a problem it has ignored for nearly a decade now.