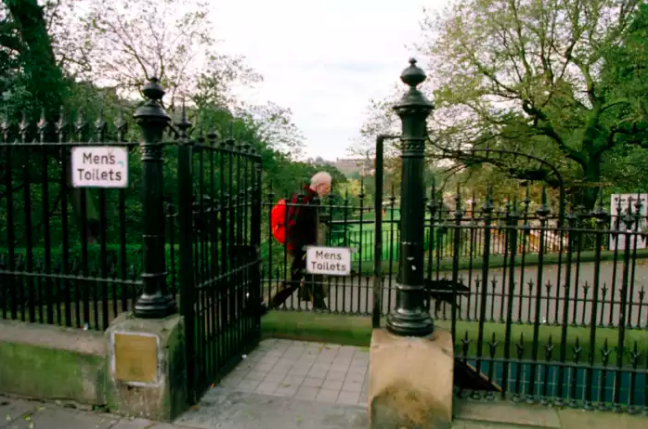 The incident happened in an area called The Mound, an artificial hill in central Edinburgh. The 32-year-old grocer, who was with his six-year-old nephew, walked into the restroom and saw one man “crouched down at another’s groin” while another ten or so guys watched and pleasured themselves.

“I just quickly walked out,” the grocer tells Edinburgh Evening News. “Luckily, I had my nephew over my shoulder facing the other direction. I was just so taken aback.”

Related: Man sues police after being falsely accused and arrested for cruising

Cops were called. They arrived and began banging on stall doors and quizzing men who were nearby; however, no arrests were made.

“I totally understand that cruising happens in every city,” the grocer says, “but to do it in the public view takes it to another level.”

The bathroom is a popular cruising zone for gay men, according to several online internet boards.

A Police Scotland spokesperson says: “Police in Edinburgh were called to a report of lewd behaviour around 4.20pm on Wednesday 3 of October in The Mound area of the city centre. Nothing was detected, however inquiries are ongoing.”

Meanwhile, the grocer says he will never use those bathrooms again and will be very cautious of which ones he uses in the future.

“I think from now on I’ll be using toilets within premises,” he says. “I don’t want to experience anything like that again.”

Related: Take a peek under “D*ck Dock,” one of the world’s most frequented cruising spots