Fans of Married at First Sight Australia are rightfully disgusted and dismayed after one of the show’s stars was outed as bisexual in front of his entire wedding party.

The premise of the show is pretty straightforward: Random couples are paired up. They meet and get married all on their first date. Then audiences watch as the relationships crumble.

Some of the relationships last longer than others. In the case of 29-year-old Liam Cooper, his marriage appears to be on the fast track to disaster after he was outed to his bride, Georgia Fairweather, when another cast member, Rebecca Zemek, interrogated them about their “non-negotiables.” 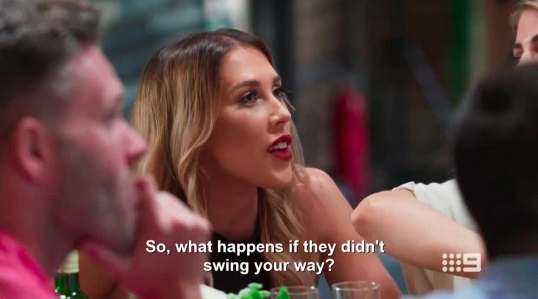 Fairweather said her relationship dealbreakers are people who are “judgmental or close-minded.” Meanwhile, Cooper said he was willing to give anyone a shot. To which, Zemek replied, “Sooooo what if they didn’t swing your way? Is that a non-negotiable?”

At this point, Fairweather started to get suspicious. She looked at her husband and asked, “Are you bisexual?”

And that’s when things got really awkward. 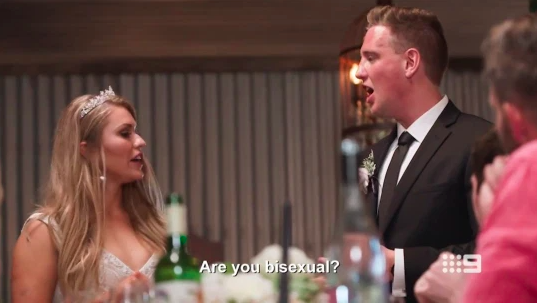 Cooper, clearly uncomfortable, confirmed that yes, he is bisexual, as Fairweather looked around at the wedding guests in complete shock. Afterwards, he told producers, “I can’t believe that that just happened in front of everyone.”

Later in the episode, he and Fairweather had a one-on-one, during which he asked how she was feeling about everything.

“I believe that whatever, like, things that you did before, it all led you to be here today and the person that you are,” Fairweather replied. “So as long as you choose to be with me and we are the people that we need to be […] it doesn’t bother me, honestly.”

The scene didn’t sit well with many viewers, who took to Twitter to voice their disapproval of the show’s handling of Cooper’s sexuality…

Are you joking #MAFS ? It’s 2021. I know these people sign up for this show (and obviously I continue to watch it) but to put someone in a position where their sexuality is basically laughed at is NOT okay. #mafsau

It’s the shitty reactions to Liam coming out for me #MAFS #MAFSAU pic.twitter.com/KnauLMk0Cx

That was disgusting and cringe to watch. The poor bloke. He should never have been outed like that, and for them to then laugh at him the way they did. Very disappointed the way #MAFS set that all up for shock value.

why is everyone staring at Liam like he just said something absolutely horrific? he’s bisexual, move on! #MAFS pic.twitter.com/ajKPxJ4XDU

No one should be forced to come out like that on national tv. I want to give Liam a big hug. #mafs #mafsau

This isn’t the first time Married at First Sight has come under fire for how it treats LGBTQ people.

In 2019, Wil Karroum accused producers of mistreating him during the audition process, asking him “very intrusive” and “severely personal” questions, including interrogating him about his favorite sexual position.

And in 2016, former Married At First Sight star Craig Roach said he felt “emotionally raped” after appearing on the show, describing the whole experience as “downright torture” that left him with PTSD.