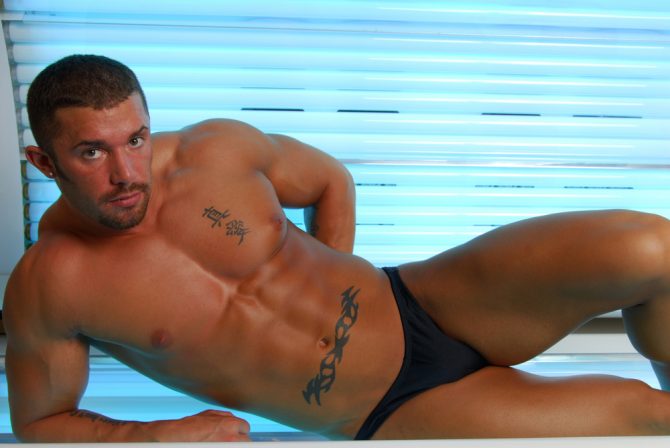 This just in: a groundbreaking new study out of Stanford University has found that indoor tanning salons may be specifically targeting gay people. Not only that, but gay men exhibit higher rates of skin cancer. Researchers now wonder: Could there be a link?

Researchers found that indoor tanning salons were twice as likely to be found within one mile of a gayborhood (defined as a neighborhood where 10% or more of households consist of same-sex male couples) than a regular, old neighborhood comprised of mostly straight people.

Coincidentally, or perhaps consequently, researchers also found that gay and bisexual men are more likely to develop skin cancer than their heterosexual counterparts.

Each year, indoor tanning is thought to cause over 460,000 cases of skin cancers in the general population. Compared with heterosexual men, gay and bisexual men are believed to be twice as likely to have skin cancer, and six times more likely to use a tanning bed over the course of their lives.

“If tanning facilities are available right next to your home,” Dr. Eleni Linos, professor of dermatology and epidemiology at Stanford University, concludes, “you’re probably more likely to use them.”

“This is a big deal, because LGBT communities already experience health disparities related to stigma and discrimination,” she tells Newsweek. “In addition, gay men have disproportionately higher rates of skin cancer.”

Researchers are careful note that its not clear if the indoor tanning industry is deliberately going after gay men, but, Linos says, “It’s definitely something I am very worried about.”

So gay men have no agency? If they see a tanning bed can they just not help themselves.

I have long suspected that tanning salons are fronts for homophobic hate groups attempting to grill gay men to death. https://t.co/HFsetJeYd9

In other news, big-box retailers like Best Buy and Target are more likely to be found in suburban ares outside of large U.S. cities, and teenagers are more likely than any other demographic to be spotted hanging out at shopping malls.

On a more serious note, though: Skin cancer is no joke and everyone should exercise caution when it comes to UV ray exposure. So lather up, fellas!