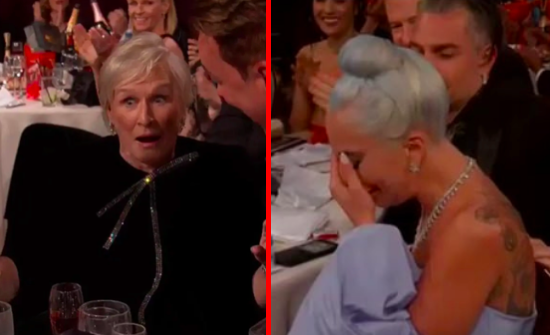 So Glenn Close beat Lady Gaga for Best Actress in a Motion Picture — Drama at the 2019 Golden Globes on Sunday in what may have been one of the biggest upsets in Globe history, and Gaga fans were pissed, to say the least:

Who the fuck even is Glenn Close

ARE YOU KIDDING ME FUCK GLENN CLOSE

The award was Close’s 15th Golden Globe nom and third win over the span of her 45-year career. And while she has been nominated six times, she has never won an Academy Award. Though that may all change later this year.

Now, Glenn Close supporters are clapping back at those mean Little Monsters who want to trash talk the Best Actress. Here’s what they’ve been saying…

DO NOT ATTACK GLENN CLOSE FOR WINNING AN AWARD OVER LADY GAGA!!!! pic.twitter.com/P3X4YgoFOl

I’m sorry to all those thinking Lady GaGa not winning the golden globe for actress is a snub, she was good, and did a damn fine job, BUT Glenn Close is an AMAZING actress and absolutely deserved this win! Quit being sour it’s an ugly look #GoldenGIobes #LadyGaga #GlennClose

I think Glenn Close may have just won herself an Oscar. The performance was great; she’s the most nominated living performer without a win (0 for 6); and she just got a mid-speech standing O at the Globes (Lady Gaga stood for the entire speech).

Glenn Close dressing up in 99 different disguises to show up to the room where Bradley Cooper believes in Lady Gaga pic.twitter.com/zuNXxHUJ6K

Glenn Close has been in the business fAr longer than Gaga, the only reason people say Gaga can act is cause they buy into her “I’m not a pretty face I can’t make it as an actress” act

my mutuals are turning against lady gaga and stanning glenn close pic.twitter.com/sYAqD4RDcS

I love Glenn Close's win so much that I am canceling dalmatians for 2019.

Isn't it wonderful that the female category is the most competitive, most talked about and most awaited award this year? Still not over this speech. It resonated with every woman in the audience. #GlennClose #GoldenGlobes #LadyGaga
pic.twitter.com/6cmYCw6OuU

Related: That time Glenn Close beat Lady Gaga for Best Actress has been immortalized in memes