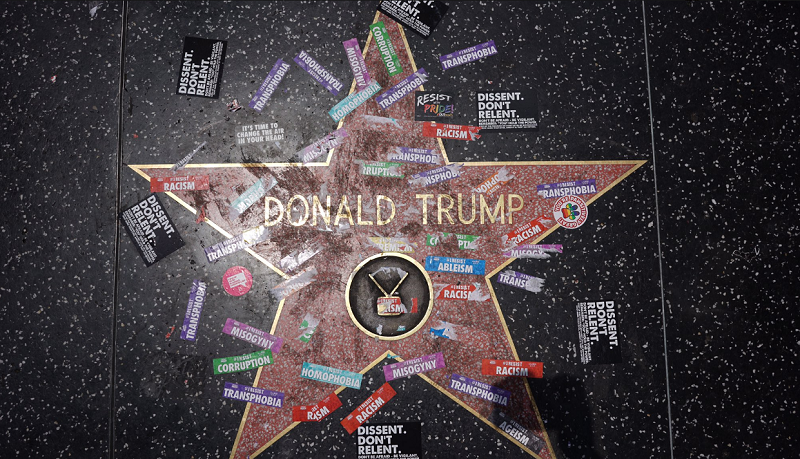 During the Los Angeles Pride march this weekend (renamed the ResistMarch to protest the current administration), Donald Trump‘s star on the Walk of Fame was covered in dozens of pro-LGBTQ stickers.

As you can see in the photo above, the stickers brandished messages like “Dissent. Don’t Relent,” and “Resist Homphobia/Transphobia/Misogyny/Racism/Ableism”.

It’s only the latest incident in which Trump’s star was messed with. Over the years, it’s been smashed with an axe, spray-painted with a swastika, and even walled up (to protest Trump’s projected Mexican border wall.)

During the Sunday march, many protestors held up signs with messages like “If Hillary was President we’d all be at brunch right now.” Others chanted “Impeach 45!” and “We’re here, we’re queer, get that Cheeto out of here!”

As you probably know, Trump’s White House has stayed mum regarding Pride, making no official statement to acknowledge the monthlong celebrations. This is in stark contrast to Obama, who commemorated the occasion every year of his presidency.

Last June, Trump commented on the massacre at Orlando’s Pulse nightclub, saying he’d do “everything in my power to protect our LGBTQ citizens from the violence and oppression of the hateful, foreign ideology, believe me.”