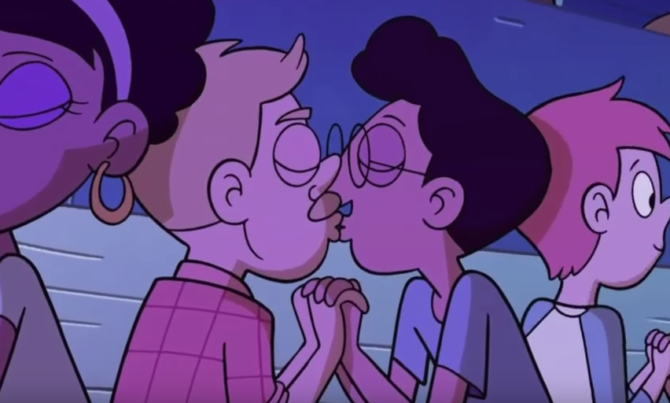 If you want people to take your bloviating seriously, you’re going to need to step up your game.

Or perhaps it’s time for One Million Moms, the antigay Christian activist group that vastly inflates its numbers in its very name, to find something else to clutch their pearls about. America just isn’t having it.

Related: Another Great Ad, Another Predictable Freak Out From One Million Moms

It would almost be funny how these people can find evil so often in children’s entertainment — anything with an inclusive message will do — if it wasn’t so sad at the core. Many of these folks are raising children with their warped worldviews.

Here’s there call to action over the above clip:

Alerting all parents! In a first for the Disney Channel, a Disney XD show subtly displayed several gay kisses in an episode that aired a couple of days ago.

The “Star vs. the Forces of Evil” episode featured a scene at a boy band concert where several people, including same sex couples, kiss on cue with the music. The gender of various other kissing couples in the crowd is not always visible.

Though this is the first on-screen same sex PDA, Disney has included a homosexual relationship in its TV show “Good Luck Charlie.”

Disney has been under pressure from the gay community to portray openly gay relationships in its TV shows and movies. And last fall, the creators of “Moana” mentioned in an interview with a liberal media source that they wouldn’t rule out an LGBT Disney princess. Director Ron Clements said, “It seems like the possibilities are pretty open at this point.”

There’s also word the new “Beauty and the Beast” will include a gay storyline – between LeFou and Gaston. “LeFou is somebody who on one day wants to be Gaston and on another day wants to kiss Gaston. He’s confused about what he wants,” director Bill Condon told Attitude magazine. “It is a nice, exclusively gay moment in a Disney movie,” Condon added.

This is the last place parents would expect their children to be confronted with content regarding sexual orientation. Issues of this nature are being introduced too early and too soon, and it is becoming extremely common and unnecessary.

Disney has decided to be politically correct versus providing family-friendly entertainment. Disney should stick to entertaining instead of pushing an agenda. Conservative families need to urge Disney to avoid mature and controversial topics.

So far the complaint has been signed just over 7K times. Although that’s not exactly comforting, it’s a long cry off from a million and has zero chances of rolling back inclusivity.

See you next time, Moms.