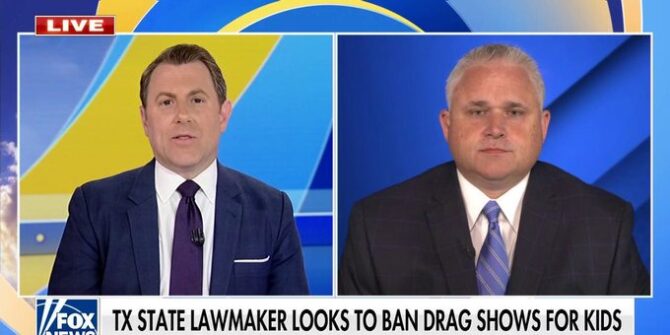 Political nobody Bryan Slaton has finally gotten a crumb of attention for his insane proposal to ban drag from minors, and now he plans to ride those sequined coattails all the way to the top.

A quick scroll of his Twitter feed will show that drag is nearly the only thing Slaton has talked about since releasing his proposal. Just weeks after the shooting of 38 people and murder of 17 children in Uvalde, Texas–the state Slaton legislates for–this gun-loving clown has decided to shift his entire focus to drag performers.

At a drag show in Dallas this past weekend, sick adults enticed kids to put dollar bills the underwear of men dressed as women.

This is disgusting and dangerous. It can’t be allowed to continue.

My Republican colleagues and I will protect kids from these sickos.

We must protect Texas kids from sick adults who want to sexualize them.

Yes to letting kids be kids.

Thank you @MarkDavis for having me on your show this morning to talk about my plan to protect Texas kids from drag shows.

We have to stop adults from sexualizing children and let kids be kids!

Keeping kids away from drag shows isn’t part of some complicated agenda.

It’s about keeping them safe from perverted adults who want to sexualize them. That’s it. https://t.co/1RGsWPgDFx

One of the funniest parts is that Slaton and his ilk can’t actually find the instances of sexualization from queens that they’re railing against. They’ve done everything from condemning musical chairs to lying about a woman in a burlesque club being a drag queen, but that’s the best they can do.

Check out this clip being called “disgusting” and “provocative” of a fully clothed kid dancing in a way that only a wack-job would read as provocative:

This is disgusting. The only people who think kids belong at drag shows are perverted adults and groomers.

Admittedly, the drag crusade hasn’t been his sole focus. Between the tweets calling drag performers “perverted”, “sick”, and “groomers” is a video he retweeted of teenage murderer Kyle Rittenhouse firing off what looks like well over 100 bullets in about five seconds with the caption “Come and take ‘em, Joe.” After Uvalde. Who’s really sick here?

All that said, it’s heartening to know that the queens will not be taking all this slander without a fight…

Oh, look, another unoriginal bully copying off of someone else’s homework! How rich considering he looks like he’s one foot tap under the stall away from a Grindr LTR. Some thoughts… (cont.) https://t.co/EgiGc4oHHP

American Republicans absolutely loathe government “over-interference” in their personal lives riiiight until it’s about something they find immoral.

My thoughts:
1) Our God is a God of Love.
2) Parents are a child’s 1st & most important teacher/role model.
3) Drag is an art form which is subjective.
4) You, sir, have tweeted more about #drag than the loss at #Uvalde. Is this truly about children or politics? #Priorities pic.twitter.com/lawP6pJMek

If you want your kids to be safe you should be keeping them away from priest.