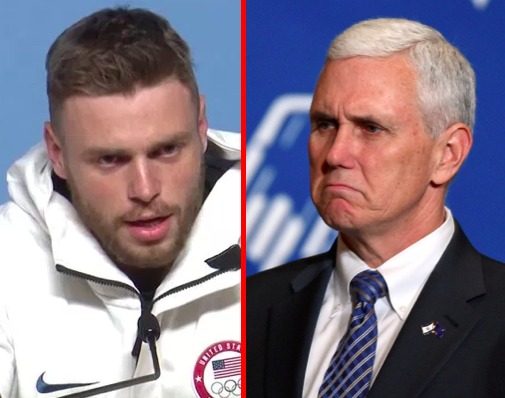 Olympic skier Gus Kenworthy certainly didn’t hold back when asked his opinions about Mike Pence during a press conference the other day.

When asked about possibly meeting with Pence, Kenworthy shot that down real quick.

“I think I’ve kind of made my opinion on the matter pretty clear,” he said. “I don’t think that I have any inclination toward a meeting.”

He added that taking time to meet with Pence would be a “distraction” from what he’s actually in Pyeongchang to do.

“I’m just focusing on competing but I’m very excited to be here representing the US and the LGBT community.”

Asked what he’d do if he happened to run into Pence by chance, Kenworthy replied:

Well, I guess we’ll see how I handle it. I think I have always been someone that has had to compartmentalize my life because I was in the closet and I always at fear of outing myself. I always had so much going on in my mind that I couldn’t share it with anyone, so I actually feel, now that I’m out, I have less to compartmentalize.

I’ve made it very clear who I am and I think I have taken a step into a sort of leadership role for the LGBT community because there isn’t a ton of representation at the Games. It’s also just me and I’m just being myself so it’s almost easier than ever to be here and be competing and just feel free and liberated.

Related: Gus Kenworthy and Adam Rippon share a tender kiss: “We’re queer. Get used to it.”

Kenworthy, who is currently nominated for Favorite Winter Olympian in the 2018 Queerties, also talked briefly about getting to know fellow out athlete Adam Rippon.

“I’m very happy to meet Adam,” he said. “We got to hang out at opening ceremonies and I think he’s just a tremendous guy.”

“I’m excited for Adam and all the other out athletes here.”

Oh, and what about Pita Taufatofua, a.k.a. the Shirtless Tongan, who braved freezing cold temperatures to be his country’s flag-bearer during the opening ceremonies?

“I actually don’t know how that Tongalese guy did that because it was freezing,” Kenworthy said. “I’ve got a lot of respect for that guy, and sure, I would happily do that, but I think there are more aptly suited people to carry the flag.”

Related: Pita Taufatofua (a.k.a. the Shirtless Tongan) is back at the Olympics and everyone’s fainting