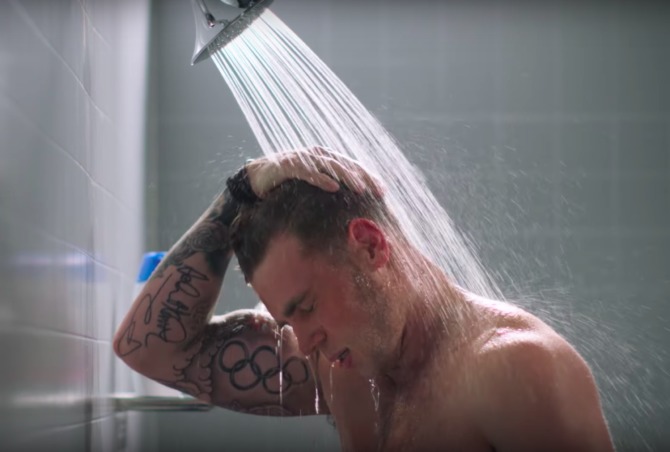 Gus Kenworthy and Adam Rippon will make history together by representing the U.S. as the first openly gay men at the Winter Olympic Games this week in South Korea. Kenworthy, in fact, stars in a major new commercial, but in this category he is hardly alone: the free-style skier joins a host of other LGBT Olympians (and causes) who have had campaigns built around them.

Kenworthy appears in a the Head & Shoulders campaign from Procter & Gamble. Sporting a rainbow flag and arm tattoos, Kenworthy announces: “My shoulders carry more than my country’s pride; they carry my community’s pride, my family’s pride, and pride in myself.” The free-skier is shown doing somersaults on the slope as well as lathering up in the shower.

It was a smart move by Proctor & Gamble. Ellen, a sucker for hunks, picked up on the ad and invited Kenworthy on her show, amplifying the ad manyfold.

The company has been busy in our space. It also recently debuted this poignant #LoveOverBias campaign for the Winter Olympics called “Thank You, Mom” — it includes a teenage boy ice skater, the victim of bullying, with a black eye who is comforted by his mom. To the tune of “Ooh Child (Things Are Going to Get Easier),” it ends on the line: “Imagine if the world could see what a mom sees.”

Puerto Rican Olympic boxer Orlando Cruz and his sexuality were more overtly featured in a Lulumon commercial last fall. Rotating and wearing nothing but his well-filled, rainbow Speedo swimsuit and tattoos, he says in his native Spanish, “I remained silent for many years, out of fear of rejection in my career. It was time to scream that inner feeling out loud.” Then he gives the camera a kiss. “I proved to the world that there is power in being a gay boxer” — making a rare use of the word “gay” in a brand commercial. Cruz, who competed in the 2000 games in Australia, in 2012 was the first boxer to come out as gay while still active professionally.

Chris Mossier, the first transgender member of Team USA, appeared in a Nike commercial, which debuted during the Rio Olympics in 2016. As Mossier bikes, runs and works out, the narrator asks, “Hey Chris, how did you know that you’d be fast enough to compete against men? Or strong enough?”

5. Gail Marquis for University of Phoenix

Gail Marquis, a basketball player who competed in the 1976 Summer Olympics, appeared in a heartfelt 2016 spot for the University of Phoenix that features the inspiring poem about the fight against discrimination, Still I Rise, by Maya Angelou.

It shows a young black woman work hard, study and fight for her rights, including marching at a Gay Pride parade with her partner. It begins with Angelou’s signature voice, then ends on Marquis as she delivers the same poem to a room of graduates — as one young woman watching wells up with tears.

Before the 2014 Winter Olympics in Sochi, Russia, just as Russia started to crack down on LGBT people, the progressive Canadians introduced a few zinger commercials.

The Canadian Institute of Diversity & Inclusion had a snarky response to Russia’s anti-LGBT propaganda law with this PSA. Two male, masked luge athletes are dressed all in black as they thrust back and forth to the tune of Human League’s 1981 hit, “Don’t You Want Me.” The tagline: “The games have always been a little gay.”

In another campaign from up north, Bell Canada, shows a rapid-fire series of Canadians watching the Winter Games while doing Canadian things, including a male couple sitting in their living room and they go in for a kiss.

The same year, fashion company XXL featured a pair of women in Norway during the opening of the Winter Olympics. A sexy woman steps out of her stylish, 1970s-era car at the airport, then struts through the airport as she ignores various athletes and random men perform over-the-top stunts with hockey pucks, Frisbees, soccer balls, and basketball (Yes, mostly summer sports.) Hundreds of men follow her onto the tarmac, where she approaches a private plane and is greeted by…a kiss from her girlfriend. (Surprise!) She turns to the disappointed men and shrugs her shoulders. The tagline: “Whatever team you play for. XXL”

“Closet Confessions” is a short web series and Weir gives a tour of his home closet while he comments on some of his favorite pieces, including a Balenciaga bags “tree.” With a furry rainbow coat, Weir says, “This jacket makes me feel really beautiful, like I’m walking around in art. It’s like wrapping yourself in a Picasso.” The ad ends with him saying, “I want to be the next Kate Moss.”

Back in 1982, pre-out Olympic diver Greg Louganis showed off his lithe body and a double twist dive into the pool for a Mercantile Bank commercial. Louganis won gold medals at the 1984 in LA and 1988 in Seoul for the Summer Olympics. He announced he was gay in 1994 at the opening ceremony of the Gay Games, and that he was HIV positive in 1995.

And how could we forget Caitlyn Jenner? After winning the gold in 1976 Montreal for the decathlon at age 26, the remarkable athlete pitched for Wheaties.