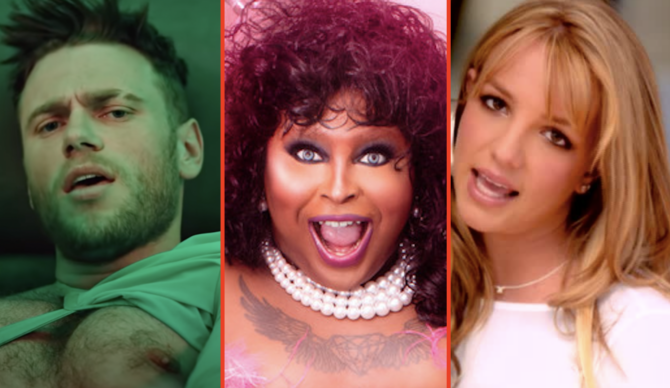 The rainbow festival scene is finally out in full force. Something about the calendar hitting June feels like a gay stat-boost. (Well, maybe not for the Christian Walkers and the Caitlyn Jenners of the world, but certainly for the rest of us!) Grab your sunscreen, your three-inch inseam shorts, and your almost-ironic handfan; it’s time to dance! This is the weekly bop roundup.

As if queer girl group Muna recording for the Fire Island soundtrack weren’t a slay enough concept, they decided to make their entry a throwback cover of seminal classic “Sometimes” by Britney Spears. They maintain the coy shyness of the original single while still adapting it seamlessly into their more upbeat synthy style to make for a track that satisfies as the sum of its parts.

Taste So Good (The Cann Song) by Kesha, Vincint, and Hayley Kiyoko

The concept of the “industry plant” in music is usually complex, and a lot of nuance can be brought into discussions of the industry’s machinations. This is not one of those complex situations. Cannabis-soda company Cann commissioned this in partnership with Weedmaps and somehow they ended up with an absolute banger. We’re not sure whose idea it was to bring together the stunning queer talents of Kesha, Vincint, Hayley, Leland, MNEK, and a host of drag queens and guest stars, including Gus Kenworthy, all for a soda commercial, but they need a raise. Somebody get Mr. Cann himself on the phone right now.

Blow Out My Candle by Betty Who

Betty Who has such a dedication to make the most danceable pop possible, and there needs to be Nobel Prize category for it. A “self-love in the face of adversity” track with a catchy foot-grooving chorus is exactly what the doctor ordered for Pride season. Big “crowd bouncing a giant inflatable rainbow beach ball during a fruity little festival set” energy from this one.

Ocean Kelly better not stop until the entire MCU is vogue-mixed. After the viral success of “Wanda’s C*nty Vision” (Kelly’s freestyle over a Wandavision theme remix with well over a million streams to date) and her subsequent track “Agatha’s Revenge”, she’s closing out the trilogy harder than ever. Kelly rides the Multiverse of Madness beat as “The Scarlet B*tch” while ATL creative Adrian Xpression comes in as, and we cannot stress this enough, “C*cktor Strange”. For as silly and referential as her tracks can be sometimes, the verses here serve as genuine examples of Ocean Kelly’s pen being one of the hardest in underground queer rap today.

Maggie Rogers has taken genre as more of a suggestion since getting discovered, but this underlying grunge-adjacent sound is a very new turn for the “Alaska” singer. Between this and her April single “That’s Where I Am”, Rogers’ Sophomore album Surrender due out July 29th is shaping up to be another real moment. You could say we really want want it.

That’s our top five for this week! Check back here this time next weekend for the latest and queerest in music.