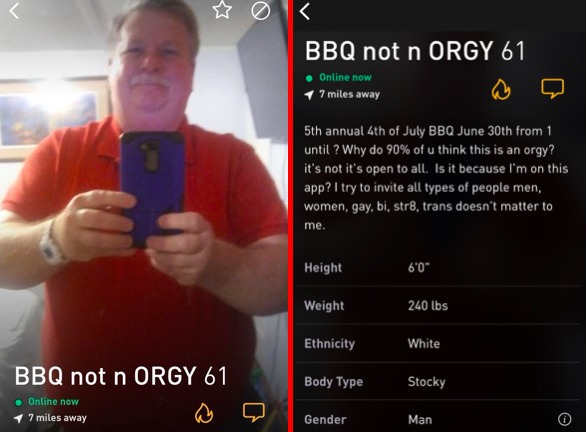 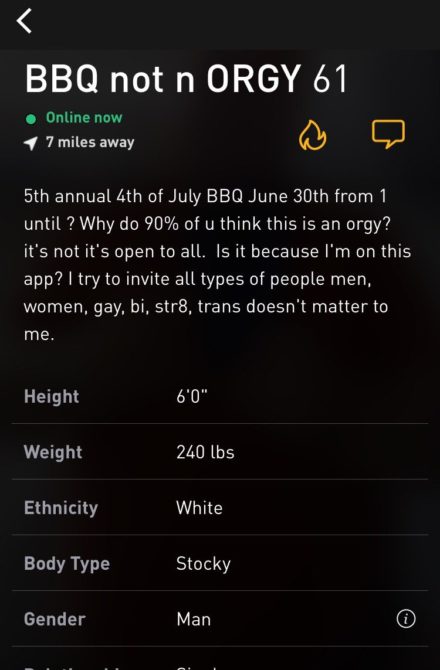 61-year-old Bowman also reached out to several people with personal messages, letting them know there would be plenty of delicious food and plus-ones were totally welcome: 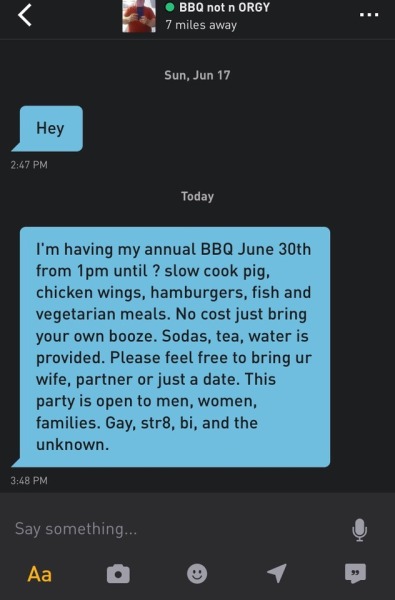 Word of the barbecue quickly spread beyond Apex and pretty soon people around the country were posting about it:

this is my energy pic.twitter.com/r147E0H1et

all i’m saying is YALL CLOSE ENOUGH TO GO BETTER GO CAUSE I DONT WANNA SEE THIS MAN SAD LIKE PAPAW WAS WHEN HE MADE 12 BURGERS FOR ALL 6 GRANDKIDS AND ONLY 1 SHOWED pic.twitter.com/cRdrWOM3fV

he’s the burger pawpaw of the lgbt community

23-year-old Matthew Setzer, who lives nearby, received a personal invite from Bowman on Grindr. He tells BuzzFeed News that he hadn’t thought about going until he saw it went viral on social media.

“You get a lot of spam and odd messages on Grindr, so initially I just glossed over it and didn’t think much of it,” Setzer says. “But everyone was really supportive on Twitter so I thought, hey, I got the message! I might as well go to this thing.”

He and his friend Mark attended and had a great time.

“Everyone was super sweet, really engaging, and it was actually a really diverse group of people,” he says.

There on my page! But here! pic.twitter.com/Cajl5DW0yr

Bowman, who is bisexual, tells BuzzFeed News the annual barbecue is his “way of giving back.”

“As an alcoholic, I haven’t spoken to or seen my kids since 2004. I haven’t talked to my mother since ’99,” he says. “There’s things that go on in life that you make choices about, and I chose wrongly. I chose the drink.”

“I’ve been sober for 8 and a half years now, and I just kind of feel the need, instead of being the asshole that I was, to be a softer, kinder, gentler, let’s-get-together kinda guy.”

He adds, “I’m a people-person, and I enjoy people, so what better way than to have strangers over and invite people and just have fun? It probably sounds really weird, but you can get away with it in North Carolina.”