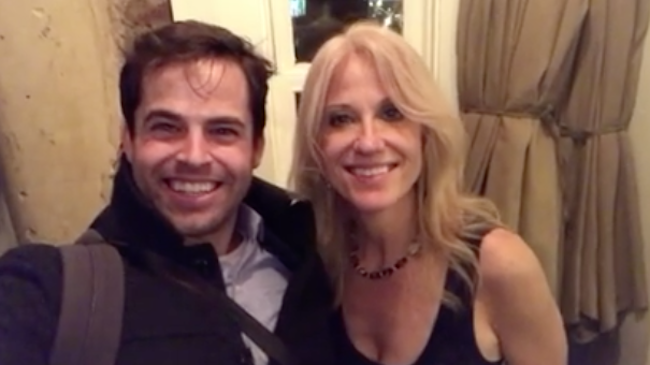 Some chances only come once in a lifetime.

Meet Alfredo Pelicci, a Washington, D.C.-based lawyer who seized a very rare opportunity when he happened upon Kellyanne Conway and her bodyguard in the hallway at Lupo Verde restaurant.

“I walked right up to her and asked her for a selfie,” he tells Buzzfeed.

Conway happily obliged, but Pelicci didn’t take the promised selfie — he hit the record button instead.

“Say I’m ruining America!” he cried, smiling and posing beside the President’s advisor.

“You’re so brave! You should be happy!” a disgruntled Conway crowed.

Here’s how it all went down (click the speaker icon to turn on sound):

Since posting the video Thursday, Pelicci has become something of a folk hero on Twitter:

Am I the only one hoping this video of Alfredo Pelicci and Kellyanne Conway was recorded somewhere in Bowling Green? https://t.co/ZhFPlpzgSp

i fell out my damn chair https://t.co/eatSRvc740

Not all heroes wear capes https://t.co/yEMZypSs0W

alfredo pelicci is US main bae!

Funny indeed, but still not as funny as this.

My sister discovered she shares a birthday with Kellyanne Conway. Her bday is inauguration Day. That means this was Kellyanne's bday dress. pic.twitter.com/7YyPGh6BX9