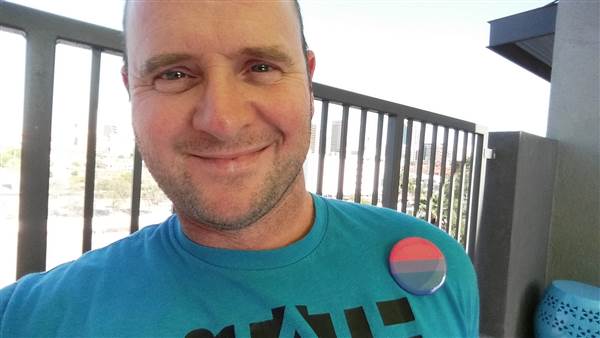 Studies have shown that, despite growing in numbers, bisexuals often have trouble finding acceptance within their communities.

A 2016 study by the Columbia University’s Mailman School of Public Health, for instance, found that many bisexual men feel forced to keep their sexualities a secret for fear of being ostracized by their peers. Meanwhile, another 2016 study by the University of Vanderbilt found bisexuals reported higher levels of tobacco use and alcohol abuse due to discrimination they suffered.

42-year-old Greg Ward knows those feelings all too well.

“I’ve heard people say that bisexual men don’t exist–‘They’re on the train to Gay Town’—things like this,” he tells NBC Out. “They don’t understand what bisexuality is, if they say things like that.”

Related: Would You Date Someone Who Identifies As Bisexual?

For years, Greg struggled with his sexuality. He didn’t tell anyone he was bi until he was 25. When he confided in a close friend, she told him she thought bisexual men were “disgusting” and that she would never date one.

Meanwhile, other friends of his began making fun of him behind his back. The experience left Greg feeling “awful” and forced him back into the closet.

He didn’t tell anyone else again until he was in his late 30s, after he lost a close friend to cancer. Her death made him realize that, “Life’s too short to be in the closet. I’ve got to do this. I’ve got to live my life.”

At the time, he says, there weren’t any resources for bisexual people living in his area.

“I would search online for different things in the valley here in Phoenix,” Greg explains. “There really wasn’t anything, so I was like, ‘I guess I have to do it.'”

Related: “Straight” Guys Are Having More Bisexual Sex Than Ever Before, Study Finds

So he launched Fluid Arizona, a social group for people who identify as bisexual, in 2014. The group organizes dinners, happy hours, BBQs, and other get-togethers to offer people a space to meet. He also participated in the #StillBisexual campaign, created by Nicole Kristal, and began posting videos about his story, as well as general information about bisexuality online.

Soon, he was flooded with emails from people all across the country.

“They talk about how my stories have really helped them and they’ll have similar experiences and being able to be a part of the online community helps them identify with other people like them,” Greg says. “They realize they’re not alone in this world, that they have this strong community that they can share the fears they have, whatever excitements they have, with others just like them.”

Watch Greg’s story in the video below…