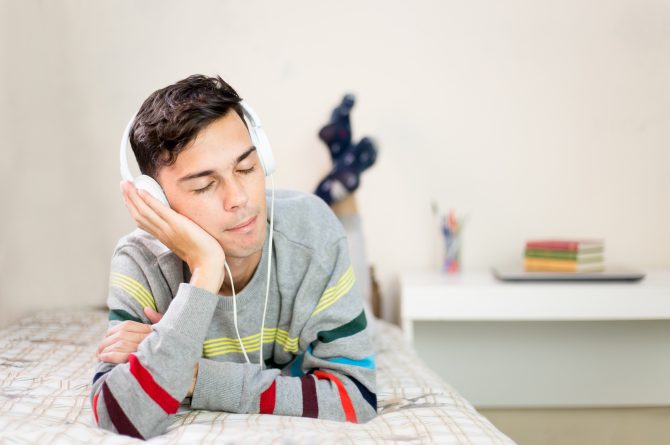 A lot of guys like to be lulled to sleep by a man’s voice — including, it seems, some of our heterosexual counterparts.

Take the Redditor whose ASMR use apparently has him questioning his sexuality. (For those of you out of the auditory loop, ASMR stands for autonomous sensory meridian response, and it’s often characterized by a relaxed feeling brought on by whispering or other soft sounds.)

Related: So Gay ASMR is a thing now and guys are making bank offering “sound massages”

“Fellas… is it gay that listening to men whisper helps me sleep at night?” this Reddit user wonders in a recent post. “Have been pondering this question for a while. … Just to clarify, it specifically has to be a male voice for it to work.”

To illustrate his experience, the Redditor links to a YouTube video called “Sad Boyfriend Needs Your Love – ASMR Boyfriend Roleplay.” (Example dialogue, spoken in a quiet, downcast voice: “I guess I can always count on you to make me feel better, huh? When really, it should be me making youfeel better.”)

A commenter on the Reddit post says those ASMR videos don’t necessarily mean the guy is gay. “I like listening to men whisper in my ear as much as the next guy, but I’m not gay,” the commenter adds. (Another user, however, quips, “What if the ‘next guy’ is gay?”)

Another Reddit user writes, “I would say it doesn’t make you gay… but if you’re specifically listening to boyfriend roleplays and unsure then maybe you are into guys.”

And a third user had a rational explanation. “My ASMR triggers I think have a lot to do with how I was put to sleep as a kid. It could come from that,” that user wrote. “But if you’re wondering if you’re attracted to men — like, actually wondering — there are probably more indicators than just some ASMR.”

Besides, there are other straights who find male voices relaxing. “I am a male (with a female partner), but for the majority of the time, I only receive relaxation ‘tingles’ from male voices,” a Reddit user wrote back in 2015. “I too don’t understand why it happens.”

Hey, who are we to say who should give “tingles” to whom?