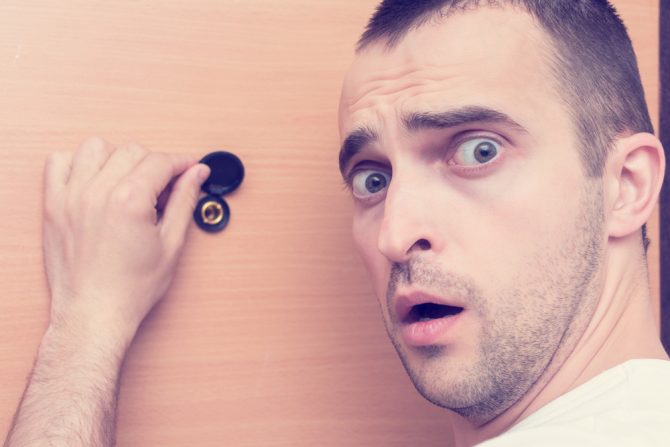 It’s happened to the best of us. After chatting with someone on Grindr for hours, you’re horned up as hell and ready to go, then you arrive at his place for that dream hookup and… he looks nothing like his picture.

Or maybe it’s not that he’s physically hideous, but he’s clearly high, acting weird, or there’s just something off. The chemistry isn’t there, or his apartment smells funky, or he failed to mention that he has a roommate who’s playing video games, right there, in the living room.

The question now is: What do you do next?

It’s easy to feel trapped in this situation. After all, you don’t really know this person, so you aren’t sure what his reaction might be if you say you’ve changed your mind. He may get angry. It might get scary, even dangerous. You may feel pity for him, because clearly if he has to catfish in order to get some action then obviously he doesn’t feel very highly about himself. Or maybe you just don’t want to hurt his feelings.

If you’re one of these people, I’d encourage you to think very deeply about this. Do you really feel so poorly of yourself that you think manipulating someone for sex is the only way you’ll get it? If that’s the case, my hope is you can get yourself into therapy and work on your sense of self-worth.

Speaking of self-worth, that’s what’s at risk if you’re on the other end of this as well.

If you ever find yourself standing in the home of a complete stranger who lured you there under false pretenses, ask yourself how many times you’ve gone along with sex out of pity or fear of confrontation and how you felt afterwards. Chances are, if you go through with a hookup you’re not into, you’ll feel bad about yourself afterwards, overcome with a sense of shame, maybe even disgust. It’s a dirty feeling to know that you’ve allowed yourself to be manipulated, but even more so when you’ve sold yourself short by valuing someone else’s feelings over your own out of a false sense of obligation.

So how do you get around this all too common conundrum?

For starters, it can help to create a loophole in advance of a potential hookup. Clearly communicate to your potential trick beforehand that an initial meeting is not a guarantee of a hookup. It’s simply a chance for you to assess each other, in person, and decide whether you want to move forward. If either of you decide it’s not a match, then that’s perfectly OK and it’s nothing personal. The meeting could happen at his place or your place, or you could arrange to meet on neutral ground, like a nearby coffee shop or bar.

Loophole or not, don’t be afraid to say no. If you’re on the fence about a hookup, ask yourself if moving forward is more for you, or for him. If it’s the latter, then it’s probably not going to be a good thing for you psychologically. No one can make you do anything you don’t want to do. And if he’s upset at your decision, know that those feelings are on him, and it’s not up to you to manage them. If he continues to pressure you, hold a firm boundary. No means no, and anything else is not OK.

Lastly, if hurting someone’s feelings feels too intolerable, know that there are ways of saying things that are less hurtful. If you’re a straight shooter, you might be OK with telling someone they just don’t look like their picture and you’re going home, which is you’re prerogative; however, you can also tell them that you’re simply not feeling it, without going into details as to why. You don’t owe anyone anything. Or, even easier, just say you’re not feeling well in general and see yourself out.

No matter what your reason, trust that by following your true feelings, you’re going to feel a lot better in the end. Sure, it could mean you suffer a moment of feeling uncomfortable, but breathe through it. You’re worth it!