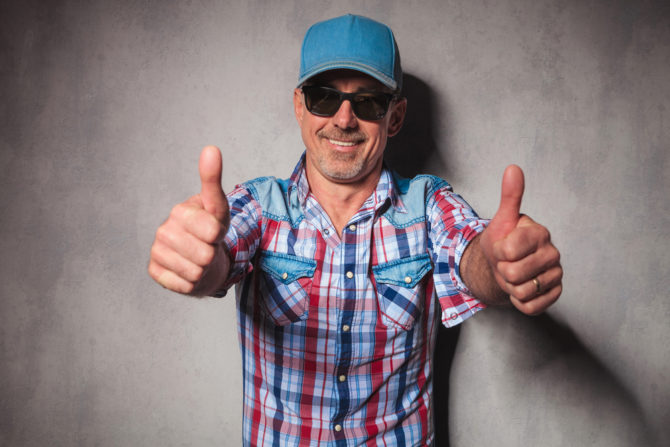 A 2013 survey found that 63% of gay men over the age 60 were living alone with no partner, which means there are a lot of single older daddies out there. But in a youth-obsessed culture, finding love, or even just sex, isn’t always easy.

We recently published an article about a 55-year-old man on Reddit who was frustrated with the guys, or lack thereof, he was meeting on Grindr:

I am an older gay male. I just don’t seem to fit in on Grindr. I usually on talk to guys who message me. I love to have sex and I prefer to meet guys who love sex as well. Is there an app for older gay male where guys are more like me?

We asked you, our readers, what your thoughts were on the matter. Let’s check out what some of you had to say about it:

“I just hit 45,” one reader said. “I got rid of Grindr years ago because it was too full of men under 30, bitchy queens and really awful treatment of men with HIV.”

“Don’t dwell on the rejections,” another reader added. “Keep going for what you want, and you may just get it. The only alternative is to give up. And I’m sorry, but I like sex too much for that!”

“Grindr and Jack’d are for the kids,” a third guy wrote. “You get all the problems you’ll find with the under 30 crowd.”

Of course, not everyone in the “under 30” crowd is an agist troll.

“I’m 29 and I think men get better with age,” one guy commented.

“There are lots of older guys that are so hot, they make lots of 20/30 somethings look like chopped livah,” another added.

Then there was this interesting perspective:

“I’m 55 and my tastes have matured right along with my years. It’s not like I’m hot-to-trot for 70-year-olds, but I no longer find twenty-somethings attractive in the slightest.”

Some people shared their own stories about being discriminated by other guys because of their age.

“I mistakenly put up a Grinder profile (I was 57 at the time) not knowing that it was geared for twenty somethings,” one person said. “I either got ripped a new one by young bitches or just the sound of crickets.”

Another person added, “At my age I get treated like I’m anathema. It feels like most guys my age move away so I can’t blame the younglings for not wanting interaction. I just cut my losses and gave up the ghost.”

“I’m in my 40s and ALREADY a Grindr pariah,” a third person commented. “Been told to get off the app several times!”

Others refused to let the bastards get them down.

“I personally never went for younger guys,” someone wrote. “Even now that I’m 56 I still am not interested. I just always thought older guys were hotter and less inhibited… and hairier.”

“I say that as long as a guy takes care of himself and looks good, who cares how old he is,” another person added.

“We come with knowledge and experiences that no 25 year old will have,” a third guy commented. “We usually are more financially mature and have settled down in a home and life we are comfortable with. WE are the catch not the younger one.”

Related: PHOTOS: Guys Over 50 Are Super Sexy And Here’s The Proof