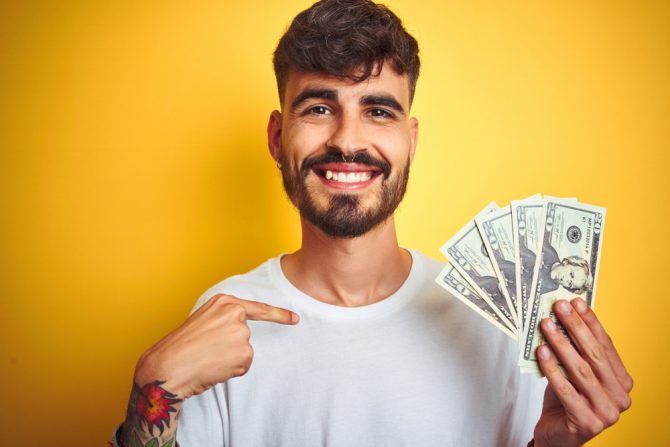 Anyone who starts using Grindr and other gay dating apps quickly becomes acclimated with the buzzwords — including “generous” or “gen only,” i.e. people willing to pay or wanting to be paid for sex.

But what’s it like to enter into such a transaction? One Redditor recently asked that very question, saying he’s always been curious.

Related: Gay guys describe why they have paid for sex

“I get ‘generous’ offers from guys a lot but I’ve never gone through with it,” he wrote. “I’m terrified of getting caught or it being a set-up. However, every once and a while, the offer is so much money that I’m very tempted. I would love to hear stories of people who have taken money and whether you think it was worth it.”

Another said he became a financial dom. “I once did a findom thing with a ‘generous’ guy just to see what it was like,” that user wrote. “He showed up gave me 1,800 bucks and left. I’d recommend it to anyone.”

As for the generous types, one guy said he was offered a massage with a happy ending for $100. “He was a beautiful guy with a nice fit body and a kind disposition. I’m no great looker, but he seemed to be attracted to me, and we ended up doing a little more than he had originally offered,” he recalled. “He was very passionate and thanked me afterwards, and I very gladly paid him with a generous tip. … Overall, it was a great experience, but I won’t be doing anything like that again I don’t think.”

Another user entered into a strictly PG generous relationship. “Had a guy offer me 800 a week for a platonic month of just being there with him,” he wrote. “And going [on] cute dates. He was 28, which isn’t by any means old, especially because I’m 19.”

Other guys, however, warned their Reddit brethren about phishing. “Apparently, there are a lot of bots out there running this kind of scam where they offer to be your ‘sugar daddy’ so be wary,” one wrote.

“Yeah, they always hit me up asking for bank info, then promise me an obscene amount of cash each week by direct deposit,” another commented. “It’s ridiculous.”

One guy, however, apparently crossed paths with a super generous fella. “Last week some dude Venmo’d me 100 dollars just because,” he wrote. “I was ignoring him and said I didn’t want anything, but he still sent me money. Thanks, kind stranger.”