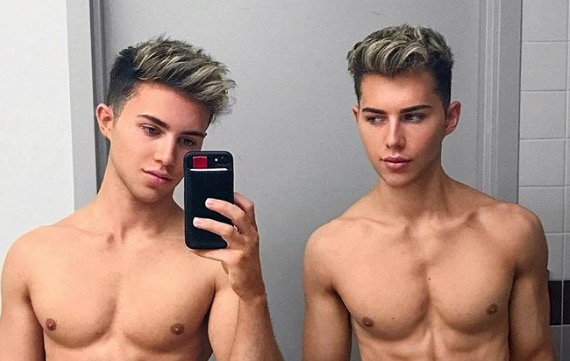 It sounds like the set-up to a rom-com film — or, ahem, the plot of a more mature film — but a Redditor says he’s getting down and dirty with twins.

“I had a regular hookup on Grindr, [and] then his twin brother messaged me about hooking up, so I did,” the guy explained on Reddit. “I let him know I knew his brother, but he didn’t seem to mind.”

Related: These twins have some news — can you guess what it is?

He continued: “It felt really weird to me, but I was also super into it. They were mostly similar bottoms, except the younger one likes to be spanked. Is this normal, has anyone else been through this? I’m worried I’m gonna catch feelings for both of them.”

Said another: “As a twin, yes it is a deal killer. We are both on Grindr and guys will knowingly try to hook up with both of us even after being told we are twins and not into that.”

But getting back to the guy’s original question, the consensus among commenters seems to be that hooking up with twins isn’t the best idea.

“As a twin, I think it’s very weird and would find it disgusting,” one wrote. “If the guy was really hot, I’d probably get over it, but it’s still nasty. That being said, I’ve also dated a twin, and catching feelings for both is pretty natural. Please try and pick one.”

Another commented: “You’re an adult. They are adults, you live near each other… You’re all single and gay and looking to hookup… It’s very likely to happen. Not a big deal when it does, but I think I’d pick one… say, the one you met first and stick with him. F*cking twins separately for weeks or more seems rather odd, in an unsettling way. It’s the same as you two f*cking brothers on an ongoing basis… odd. And if their friends or family found out… THEY would be in a tough spot.”

“No need to create unnecessary weirdness,” that commented added. “Pick one… unless the three of you get married.”