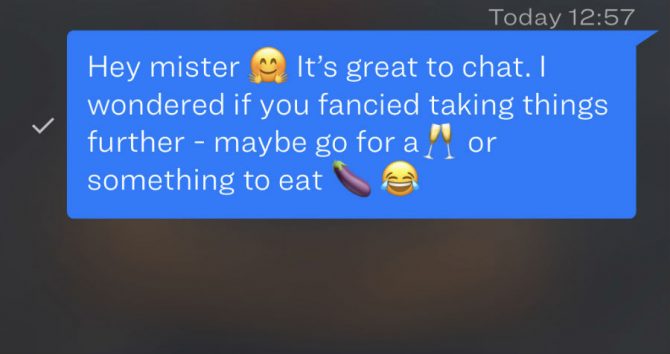 A new study concludes that people who use more emojis in their text messages have busier sex lives.

According to the authors, this isn’t all down to the fact that younger people are more likely to use emojis than older folk.

Published in the journal Plos One last month, the researchers – from The Kinsey Institute in Indiana University and the Department of Psychology in Lake Forest College in Chicago – undertook two separate studies.

The first study looked at over 5,000 US adults. Just over 10% identified as gay/lesbian/bisexual. All were single.

They were asked questions such as: “How frequently do you use emojis/emoticons in your text messages to a date?” Researchers also asked them how many dates they’d been on in the previous year and approximately how many times they’d had sex.

Related: “Is it sexual harassment to leave an eggplant emoji on someone’s Instagram?”

The main finding was that around 30% of those surveyed regularly used emojis in their messages. These 30% also reported going on more first dates and having more sex in the previous 12 months.

A second, smaller study went further. Recruiting 275 participants, it asked the same questions. But it also asked about second dates and whether sexual activity was with the same or more partners.

This smaller study found no significant association between emoji use and first dates. However, those who regularly used emojis were more likely to report second/follow-up dates, a higher number of sexual partners and more sexual activity.

It concludes, “Our findings suggest that emoji use with potential partners is associated with maintaining connection beyond the first date, and more romantic and sexual interactions.”

When you meet someone in real life, body language can give you clues as to their personality and how they are feeling. In the digital world, emojis can go some way to replace body language.

Emojis are one way of displaying emotions that may be more difficult to express with text: they can be a way of communicating intimacy.

The study did not look at what sort of emojis were sent between people and suggests more research is needed.

So, unfortunately, we can’t tell you if those eggplant and peach symbols are helping you secure a date or not.