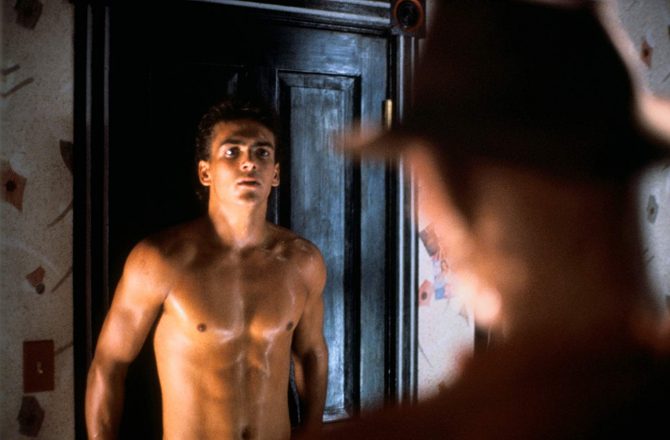 The Queen Mother: A Nightmare on Elm Street 2-Freddy’s Revenge.

The plot: openly gay actor Mark Patton stars as Jessie, the new kid living in the Elm Street house five years after the events of the first film. Jesse begins to dream about the return of Freddy Kruger, the mass-murdering undead master of dreams. Worse, he wants to awaken something evil inside Jessie, which will allow Mr. Kruger to take full possession of Jessie’s body, and live to kill once more.

Or something like that. Freddy’s Revenge doesn’t exactly have a cogent plot. What it does have going for it, on the other hand, is plenty of innuendo and metaphor…not to mention a very cute Patton dancing in his undies. The film also features extended shower scenes (including one of a man whipped to death with towels), scenes in a gay bar, scenes of teen boys cuddling, and more. Screenwriter David Chaskin has, in the decades since the 1985 release, come to speak openly about adding the gay subtext to the film–something he once denied. Mark Patton, for his part, says the movie seriously damaged his career, as it led him to be typecast as gay. He was also in the closet at the time of filming, and with the AIDS crisis hitting a fever pitch, alleges that Hollywood wouldn’t cast actors suspected of being queer. The details of Patton’s ordeal and the legacy of the film are detailed in the excellent documentary Scream, Queen! My Nightmare on Elm Street.

Still, for a bit of campy humor, horror, the sight of Patton in his undies and plenty of how did nobody know this was so gay puzzling, we recommend Freddy’s Revenge for some Halloween viewing fun. Watch it together with Scream, Queen! and marvel at the legacy.