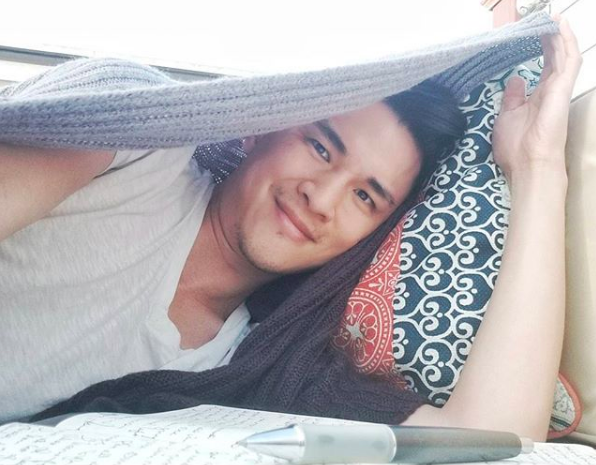 Meet Hank Chen. He’s an actor, comedian, and total hottie who, at 29, has already racked up an impressive list of credits, including guest roles on Scandal, Criminal Minds, NCIS: Los Angeles, and Law & Order: SVU, just to name a few, as well as appearances on Transparent and Grace & Frankie.

Most recently, Chen, who is openly gay, appears in the made-for-TV movie Life-Size 2 starring Tyra Banks. In an interview with New Now Next, he talks about the project and being called “hot” by the movie’s supermodel producer when he was first cast to play the character of Brendan Butler.

“I mostly thought of myself as just cute,” Chen jokes, “but if the legendary Tyra Banks wants to call me ‘hot,’ I will not complain.”

Jumping for joy for tonight's red carpet premiere of #LifeSize2. Tune in to my stories for behind-the-scenes and surprises. ? @photos_x_yves

Chen is the son of Taiwanese immigrants and grew up just outside of Washington, D.C.

He tells New Now Next that he hopes Hollywood will continue telling a range of stories that include members of the Asian and LGBTQ communities and that he can be a part of that movement.

“I want to be the entertainer little Hank needed,” he says. “I hope my contributions to the entertainment industry will help anyone, particularly young Asians and young gay kids, feel less alone.”

Smizing with my queen on the first day we met in Atlanta and fell in love as a cast. Head to @tyrabanks's beautiful instagram post for the full tea from that eventful day. #LifeSize2 #Smize

Chen says he sees things slowly but surely shifting, in large part thanks to successful films like Crazy Rich Asians or Love Simon, that feature diverse casts and stories.

“The tides are turning,” he says. “I am optimistic there soon won’t be a justification needed for an Asian person or a gay person in a script.”

“They won’t have to have some sort of trauma–unless it serves the purpose of the movie–we can just be allowed to be ordinary people, too.”

Too lazy to go inside and grab a hat or put up the patio umbrella.

In a Reddit AMA this week, Chen expanded on this idea when asked about Hollywood using Asian surnames to clearly identify a character’s ethnicity in a script.

“Often times the original incarnation of a character in a Hollywood script is not imagined to be Asian,” Chen writes, “so if he even does have a last name, it’s not going to be a Lee, Wang, or Chang.”

He continues, “If you see an Asian actor with a non-Western character name, you can be proud in knowing that actor probably fought really hard and won a role that wasn’t originally written with him/her in mind. It’s either that, or this Asian character was adopted by white parents!”

Life Size 2 premiered on December 2 on FreeForm. Watch the trailer below.