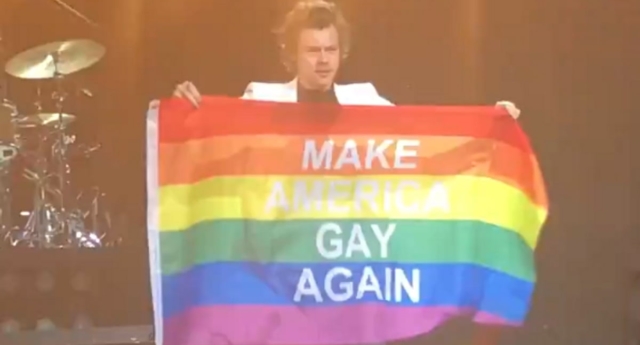 Harry Styles appears to be on a mission to turn everyone gay.

The British singer is currently on the road promoting his debut solo album Harry Styles and he’s been gaying up everywhere he goes.

Related: Twitter is having multiple orgasms because Harry Styles maybe probably came out as bi

During his show in Philly last Friday, he spotted a fan’s Pride flag in the audience. He asked her to hand it to him then he held it up for all the audience to see. It read, “Make America Gay Again.” Naturally, the crowd went wild:

Throughout the tour, the 24-year-old gay icon and longtime LGBTQ ally has been dedicating songs to male fans, wrapping himself in rainbow flags, and rocking out with Pride during guitar solos:

Oh, and then there was the time in Fort Lauderdale when he pointed to a fan mid-concert to ask what he was drinking.

“Vodka,” the fan responded. To which Harry replied, “Straight?”

When fan responded: “No, I’m gay!” Harry laughed and said, “No, I meant ‘straight vodka,’ not ‘Are you straight?’”