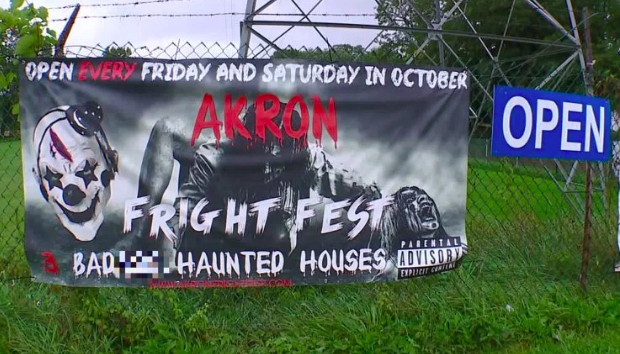 Sarah Lelonek and her boyfriend Ryan Carr were just looking to have a few scares when they visited the haunted house at their local Fright Fest at Kim Tam Park near Akron, Ohio.

But instead of being scared, they were left utterly horrified after Lelonek was forced to watch Carr be mock raped by a man in a pig mask.

“There was a man in a mask standing over my boyfriend, my boyfriend was on the edge and he was being pushed down,” Lelonek tells her local Fox 8 station.

“I’m walking by the guy grabs me and throws me on the bed,” adds Carr. “My girlfriend walks over and says, ‘Hey, what are you doing? That’s my boyfriend,’ and he says, ‘Not anymore. He’s mine now; I’m going to rape him,’ and then he started thrusting against me.”

But they aren’t the only ones complaining about this rape scenario.

One person on Facebook writes, “It was 100 percent a rape scene.”

Another adds, “They did have a mock rape scene in one of the houses.”

A third person claims, “They grabbed my ankles and shins and pulled my legs apart and was thrusting while telling me to scream papa.”

Lelonek and Carr’s experience is also similar to something that happened to 16-year-old boy, whose mother told Fox 8 her son was with a group of friends going through one of the all-ages houses.

“He said he was thrown onto a mattress by some guy in a pig mask,” the mother explains. “The guy was humping him, demanded he squeal like a pig and then forcefully took his legs and was trying to pull them apart.”

The mother, who works with rape survivors, adds, “This is not something that belongs in a haunted house.”

After the incident, the park put out a statement of Facebook saying the “rape scenario isn’t something we thought up or made up, we are and have been looking into what happened.”

Jeremy Caudill, a managing partner of Melanie Lake at Kim Tam Park, put says he was “shocked and appalled” by the reports and that “employees who worked in the area where the incident allegedly occurred have been suspended while we investigate.”

“Obviously, rape is a horrible act,” Caudill says. “Even a mock rape scene has no place as part of any entertainment. And it has no place at our park.”

Carr tells Fox 8 he thinks the scenario must have been dreamed up by a freelancing “actor” with sick fantasies.

“They are probably someone who is like sick and twisted and they get off by doing that because,” he says. “I can’t think of another reason to do that.”

“In all the years I’ve been going to haunted houses,”Lelonek adds, “I have never seen anything like that. Ever.“