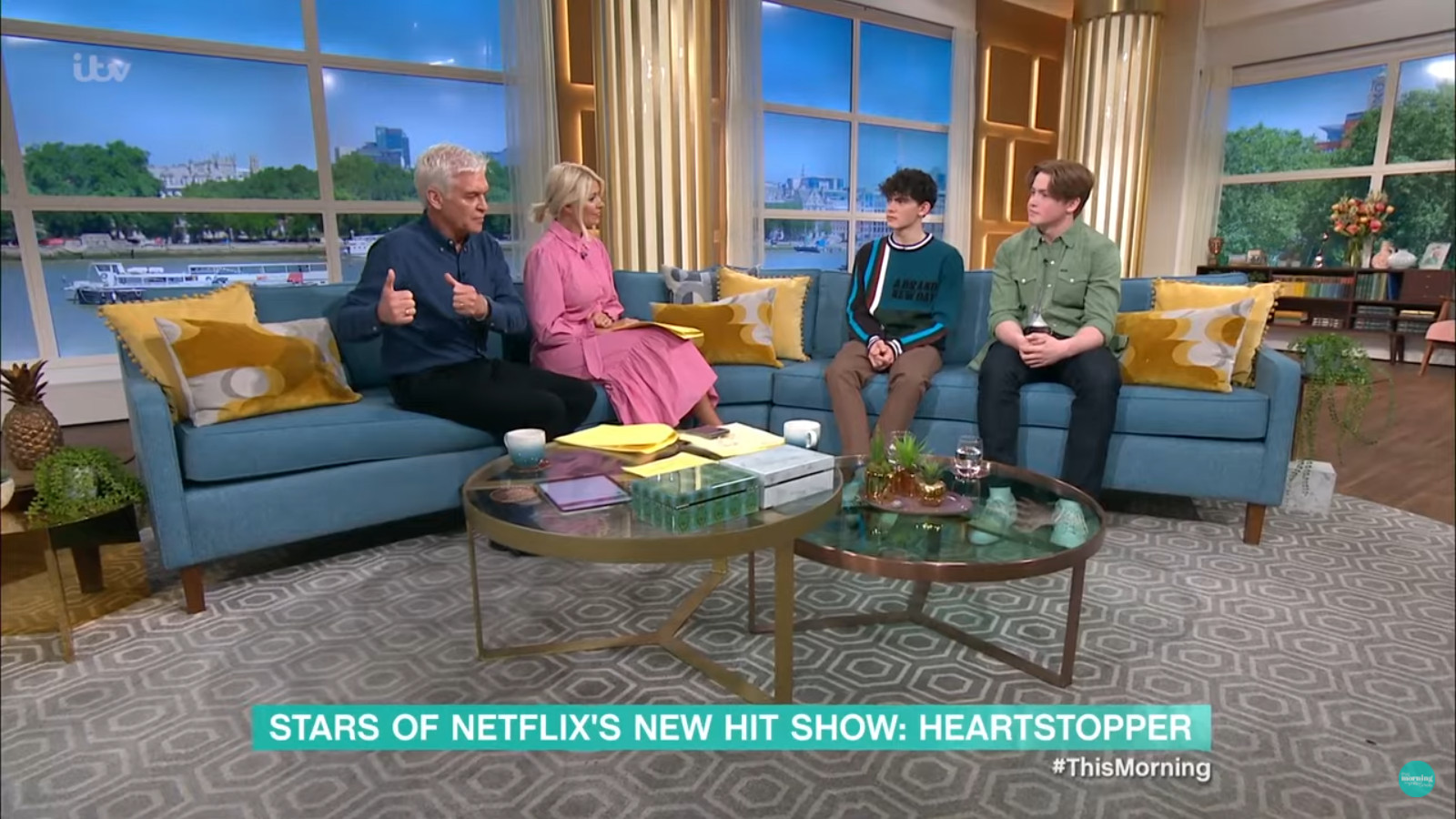 Audiences continue to swoon over Heartstopper, the new gay, teen series now streaming on Netflix. One key to the show’s success: the way it tugs–pardon the phrase–at the heartstrings of viewers, especially LGBTQ people who never could have come out as teenagers.

To review: based on Alice Oseman’s graphic novel, Heartstopper follows the story of Charlie (Kit Connor), one of the few openly queer students at his British grammar school. He has a secret boyfriend who refuses to acknowledge him in public, and who generally makes life miserable for him. That changes with the arrival of Nick (Joe Locke), a handsome new student and rugby player with whom Charlie develops an immediate attraction. Nick encourages Charlie to join the rugby team, and sparks begin to fly.

Heartstopper has earned wide praise for the tenderness with which it treats its subject matter. That extends to British TV personality Phillip Schofield, who fought back tears while interviewing the stars of the show.

Related: What to Watch: Gay teens in love, a time-slipping comedy and Sam Worthington’s dad bod

Locke and Connor stopped by the British morning show This Morning to sit down with Schofield and his co-host Holly Willoughby on April 28. For Schofield, who publicly came out as gay at age 58 in 2020, seeing the acceptance with which friends and family greet Nick and Charlie proved more emotional than he expected.

“There were good friends. There were understanding families,” Schofield said, choking back his tears. “It’s the world that you want it to be, you want that friendship group, you want that acceptance, in every school and life. There’s no question that not everyone who has these internal views is going to get such a positive reaction.”

Schofield isn’t alone in his emotional praise. In the past week since Hearstopper has rolled out on Netflix, Twitter has exploded with emotional reactions from viewers who feel validated and moved by the show.

Have a look at some of our favorite reactions…

nick nelson coming out as a bisexual pic.twitter.com/jG1nBXefjZ

3?? Nick coming out to his mother
Please tell me how you cannot cry watching them ?
I wish I could have watched that kind of scene when I was younger, it would have made things easier… HIS MOM #Heartstopper
(8/10) pic.twitter.com/bYLjIQOtLI

1?? The very last scene of the show
After a really nice flashback of all these beautiful moments, a great & wonderful sum up of their relationship. #Heartstopper