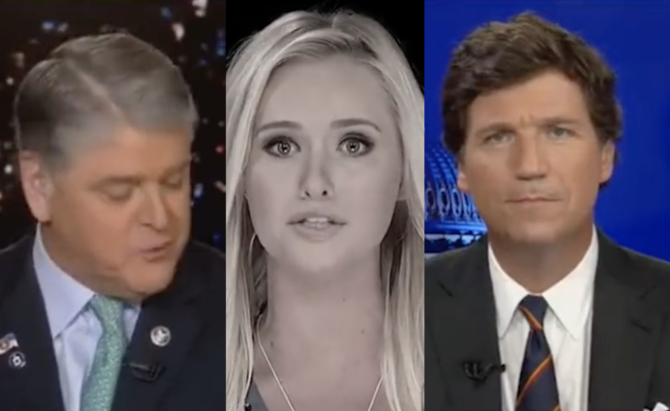 A video trending on Twitter puts into sharp focus the hypocrisy of Fox News.

Fox News hosts have had a lot to say about privacy in the wake of the Jan. 6 committee releasing several text messages they sent to former White House chief of staff Mark Meadows during the attack on the U.S. Capitol.

Hosts Sean Hannity and Laura Ingraham, two of the on-air personalities whose messages were made pubic, both railed against the committee and its vice-chairwoman, Liz Cheney.

The messages — provided to the committee by Meadows and read aloud by Cheney, showed that three Fox News hosts urged Meadows to get then-President Donald Trump to publicly call off the violent rioters who stormed the Capitol on Jan. 6.

But how do these hosts — and several others on the network — feel about privacy when they aren’t the ones facing scrutiny?

We must realize that the only explanation is that Fox News wants to destroy America.#FoxRuse pic.twitter.com/mRMErevG8m

“It’s not hyperbolic to say that Fox ‘News’ is deliberately trying to dismantle and underscore the public’s faith in our democratic institutions each and every day,” commented one viewer.

“So evidently FOX and its employees are only outraged when they are the people being exposed,” another observed. “Otherwise it’s continuous gaslighting from them.”

And one commenter put it succinctly: “The hypocrisy is disgusting.”