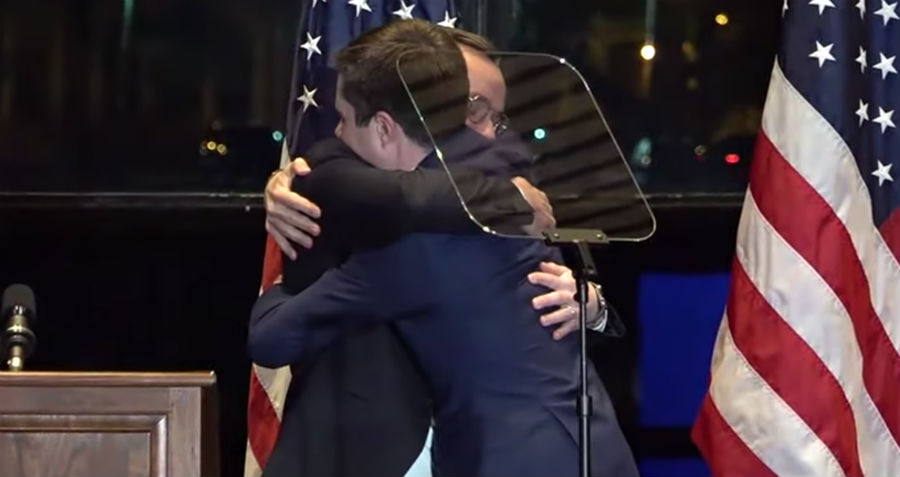 It was the Sunday afternoon slump: the end of a sunny weekend in Los Angeles, where I live, and I was coming to grips with the reality of the work week ahead.

My heart sank. I had been supporting Mayor Pete from the beginning. I had been monitoring his every TV appearance, donating to his campaign when I could, and making the case to my friends & family that he was the best person to run our country right now. Not only did I appreciate that as a gay man he was breaking through political ceilings, but I felt like we finally had a Democrat running who could bring all sides together.

Even though I am five years his senior, Pete was the first politician I could relate to directly. I had admired many pro-gay Dems: Hillary Clinton, Barack Obama. But Pete was different. He’d overcome adversity in a small town to find himself and to come out to friends and family, just as ordinary gay men must. He’s marriage to Chasten is as authentic and beautiful as my own. He also enjoys a rich religious life (I’m more on the spiritual side), but the radical love he expresses in his sense of Christianity has the potential to bring people together and was a direct challenge to the sacrilegious notion that the Bible condemns gay people.

Pete skewers the hypocrisy of the religious right better than anyone who has entered the national political scene in a long time. “For a party that associates itself with Christianity to say it is okay to suggest that God would smile on the division of families at the hands of federal agents, that God would condone putting children in cages, has lost all claim to ever use religious language,” he said at the second night of the first Democratic debates in Miami.

Most importantly, he could beat Donald Trump at his own game, simply because he is smarter and more articulate. Despite being half Trump’s age, he’s definitely more mature (not really that hard!). When Trump nicknamed Pete “Alfred E. Neuman,” Pete dryly pointed out how out of touch Trump is with young people. “I’ll be honest, I had to Google that,” said the 38-year-old Buttigieg. “I guess it’s a generational thing – I didn’t get the reference.”

A week before he dropped out, I’d mailed my California absentee ballot with the pen mark next to his name, filled with pride that I’d had the historic opportunity to vote for the first serious, openly gay Presidential candidate. And not any presidential candidate. And as I began reflecting on this Sunday afternoon, I was surprised to realize that the sinking feeling was replaced by gratitude for Pete’s amazing campaign for the most powerful job in the world, a position that just a few years earlier would have been unthinkable for an openly gay man (let alone one who shows affection for his husband on international TV on a regular basis).

As I lamented his withdrawal, I began scrolling Facebook, as one does when a major story breaks. Almost every single post in my feed was about Pete, an outpouring of love for what this man and his campaign had meant to them. The hashtag #ThankYouPete was trending in a big way, and the general feeling matched my own: Pete carried himself with grace, poise, and quiet strength throughout his run, and had not only opened doors for other LGBTQ’s in politics but set the stage for his own shot at the presidency in the future (when the 70-somethings now dominating politics will likely be gone).

As someone who’s dealt with fewer opportunities in my chosen industry for being openly gay years before that was welcome, I’m grateful to @PeteButtigieg & @Chas10Buttigieg for ignoring the odds & assumptions & creating a path for LGBTQ in politics that simply did not exist. ??

Reading post after post of what Pete had meant to my friends (mostly members of the queer community), my eyes began to well up. This was hardly the defeat I’d anticipated. And it wasn’t just historic–it was a powerful, healing and symbolic movement.

As LGBTQ, we haven’t always seen ourselves reflected in large spans of American life. Sure, representation in Hollywood and streaming services like Netflix has improved dramatically over the years. There are openly gay people throughout the mainstream media. (Thanks Anderson and Ellen!) But there are only a handful of prominent LGBTQ business leaders in the US, and the Trump administration hasn’t had many major openly gay officials. (Sorry, GOP, Richard Grenell doesn’t count).

Electoral politics has seen the rise of amazing elected representatives at the state and local level, including Danica Roem who in 2018 was elected Virginia’s first openly gay transgender legislator. Tammy Baldwin was elected to the Senate  from Wisconsin in 2002, and is a serious Vice Presidential candidate.  Jared Polis’s historic win in Colorado made him the first gay state governor in the U.S. Barney Frank was a pioneer, coming out in 1994 and earning a reputation as one of history’s great legislators before his retirement in 2008.

But the presidency is a whole different playing field. For a gay candidate to compete seriously, it would mean acceptance on a large scale, including conservative states who have long balked at electing queer people anything higher than dog catcher.

Everyone knew it was a long shot. But every time I would see him at a rally or at a fundraiser or on talk show, witnesssing just how effective his message was, the decency and values he promulgated, my heart smiled, reminding me that there is nothing on earth beyond our reach as queer people. (Ok, we probably won’t get elected to lead Iran or Russia anytime soon.) I was shocked visiting my conservative parents  in Savannah last September. My stepdad (who is an avid Republican and Trump-voter) said of all the current candidates on the Dem’s side, he liked “that Mayor Pete the best.”

From my perspective as a therapist who works to help traumatized gay men love themselves, maybe I too can internalize in a deeper way my legitimacy and power as a queer person, and place more trust in my ability to help others who in turn will help still more. I was deeply insecure in my 20’s and even early 30’s, feeling like I didn’t have much to offer, and that I had missed the boat on having a normal, healthy life. It took me years of healing to embrace my worth, and I think that’s a process that continually unfolds. Pete and Chasten as role models will certainly hurry this process along.

On Feb 22, Pete addressed a boy who wanted help coming out to his family.

Powerful moment (better audio): 9 year old Zachary Ro of Lone Tree asks @PeteButtigieg how he can be brave and tell people he is gay too pic.twitter.com/1aUbYM8cDM

In the latter part of his response, Pete said, “The second thing I want you to know is that you will never know who’s taking their lead from you, who’s watching you and deciding that they can be a little braver because you have been brave.” Although he was talking about the boy, I couldn’t help but see how Pete was actually talking about himself, and the millions he will inspire.

As the audience chanted “2024! 2024 2024!” during his concession speech, instead of feeling sad, I found myself smiling, knowing that this eloquent trailblazer has a promising future. Despite all Trump has done to demoralize American citizens, and degrade the White House, I felt optimistic again that our fight for an equal place in American life had taken another huge step forward.

As Pete’s husband Chasten said last night with tears in his eyes (and mine) before kissing his hubby on the national stage, “Pete got me to believe in myself again.”

As a community, I think we can say the same thing.