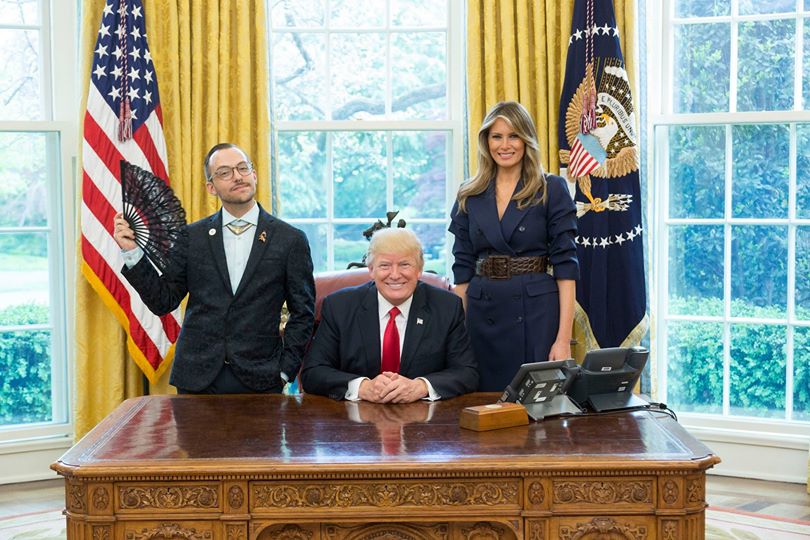 On Friday, we told you about one incredibly sprightly teacher who took Pride directly to Donald Trump‘s desk (and none too soon, considering that the Trump administration has completed ignored Pride month.)

Nikos Giannopoulos earned the distinction of being named Rhode Island’s “teacher of the year,” and that honor came with an invitation to visit the White House. As you can see in the photo above, Giannopoulos certainly didn’t squander his photo op.

Wearing a rainbow LGBTQ pin on his blue print jacket and sporting a gold and silver necklace in lieu of the traditional tie, Giannopoulos’ accent piece caused quite a stir: As he gives a sassy smile not two feet away from the first couple, Giannopoulos’ right hand holds a black lace fan. Donald and Melania Trump smile for the camera from behind the president’s desk, and the whole scene is just surreal given the administration’s rocky-at-best relationship with the LGBTQ community.

Speaking to NPR, Giannopoulos happily discussed the now-legendary fan’s origins, how Trump reacted to his bold fashion choice, whether or not he’s afraid of backlash, and what it feels like to be an Internet folk hero in 2017.

Below are some highlights from the interview:

On where the fan came from:

The fan was actually my partner’s. He bought it as a souvenir on a trip to Venice, but I found it about five years ago. Since then I’ve integrated it into my day-to-day life. I’m extremely campy, and it’s a popular prop of mine. I’ve taken it with me all over the country whenever I go on vacation, so that’s why I had it.

But ultimately, I have been visibly gay my entire life; I was more feminine than a lot of boys and I carried myself in a nontraditional gender expression. And I got a lot of flak for it. As a boy, I think I internalized that and didn’t embrace that part of me. Now, as an adult, I adjusted to my queer identity. So the fan represents self-acceptance and being unabashedly myself in a society that’s not always ready to accept that.

Oh, he loved it! I popped it open when I walked into the office because I’m a very sassy person. And [President] Trump complimented it right away. He said, “I love the fan!” And he told me I had great style. Then, when I was ushered in for my private photo with the president and Melania [Trump] I was told I should put it away. So I just folded it up and held it at my side. But when it came time for the photo, I just asked the president, “Do you mind if I use the fan for the photo?” He said, “Absolutely go for it.” So I popped my fan and did my pose.

On that ferocious necklace:

That’s an image of Rhode Island that’s prevalent throughout the state. It’s on the state motto, which is based on a Bible verse — that hope is the anchor of the soul. It’s a beautiful verse that is relevant for people of all faiths and is especially meaningful for minority groups. For anyone in a marginalized group, hope is the last thing you give up.

On becoming an Internet hero:

It’s been really overwhelming because I am a really socially anxious person. I don’t ever really go on social media that much. The only reason I’m on Facebook as much as I am this year is because it’s the primary way I communicate with the other teachers of the year.

But overall, I’ve gotten a really positive response through the whole thing. From younger people I get a lot of, “You’re my hero!” And a lot of “Werk Kween!” which makes my day.

On whether he’s afraid of backlash:

I’m not. I haven’t really noticed any negative comments on there so far. And I guess I’m used to that kind of negative response to my outward expression because I’ve always been this way.

On being named a teacher of the year:

I just want to say that the teaching profession has been the greatest thing that’s ever happened to me. Every single day I go to the classroom energized and thrilled to be there and to have been elevated to represent all of the teachers in my state. I’m not the best teacher in my state. I’m not the most thoughtful planner. But I do care a lot about my students and they mean a whole lot to me.