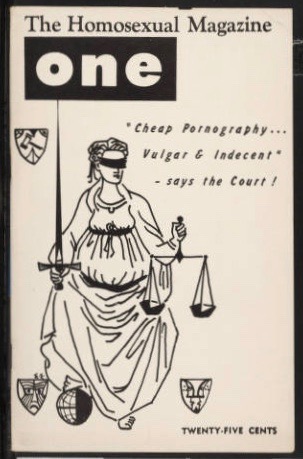 This is the fourth in our series of ONE magazine cover stories.

This entire issue, which the editors call “the most important issue to date,” is dedicated to the long legal fight ONE had been embroiled in with the Los Angeles Postmaster—a fight that, over the course of nearly three years, went all the way up to the U.S. Supreme Court.

As soon as it debuted in 1953, ONE came to the attention of the postal service, and also of the FBI. At a time when every U.S. state had a sodomy law on the books, a magazine containing gay fiction, poetry, and activist articles was unheard of. The Los Angeles Postmaster, Otto Olesen, refused to deliver the October 1954 issue of ONE on the basis of obscenity laws, calling it “lascivious and filthy.” The poems, stories, and advertisements cited by the postmaster were actually quite tame, as ONE later pointed out in court—basically the stuff of hetero romance novels.

ONE sued Olesen in U.S. District Court and lost. They appealed, but the Ninth Circuit Court of Appeals upheld the decision. Then they petitioned the U.S. Supreme Court, which not only took the case but immediately reversed the Ninth Circuit decision, without even hearing any arguments.

And with that, the first Supreme Court ruling for LGBTQ rights was born. Stories, poems, and articles about homosexuality were no longer considered any more obscene than similar heterosexual material. Assured protection under the umbrella of the First Amendment, other gay publications began to spring up, and the conversation was officially begun.

Will the homophile press be granted the same freedom to publish in the homosexual field as is now enjoyed by the nation’s press as a whole? Will homosexuality come to be regarded as an accepted form of socio-sexual behavior?