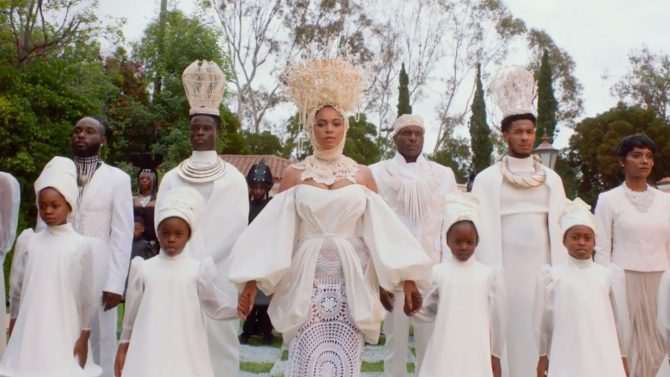 Beyoncé’s highly anticipated new visual album “Black Is King” is officially out there for your viewing consumption, and there’s only one place to watch. The film premieres today — July 31 — exclusively on Disney Plus.

“Black Is King” takes its cues from the music of “The Lion King: The Gift,” the album Bey released inspired by Disney’s live-action “The Lion King,” in which she voiced Nala. Among the featured performers are Bey, JAY-Z, Tina Knowles-Lawson, Kelly Rowland, Naomi Campbell and Lupita Nyong’o.

Ever since “Lemonade” came out in 2016, Beyoncé basically secured her spot as the queen of visual albums. Just add that to the already-extensive list of things she’s the queen of.

So fans can’t wait to get their eyes on “Black Is King,” which has been in the works for the last year and is “a celebratory memoir for the world on the black experience.”

With a runtime of 85 minutes, the experience (we’re going to go ahead and dub it an ‘experience’) includes songs, of course, as well as skits, interpretive dance numbers, and location shooting that brings the viewer on a whirlwind tour of New York, Los Angeles, South Africa, West Africa, London, and Belgium. And hey, with summer travel basically on hold, this could be the global adventure you’re looking for.

If you already subscribe to Disney Plus, you’re in luck — all you’ve got to do is log in and hit play.

Non-subscribers have a couple of options: You can sign up for the service for $6.99 a month, or take advantage of a temporary bundle deal that gets you Disney Plus, Hulu and ESPN Plus for $12.99 a month.

Queerty earns a commission from purchases made through affiliate links.