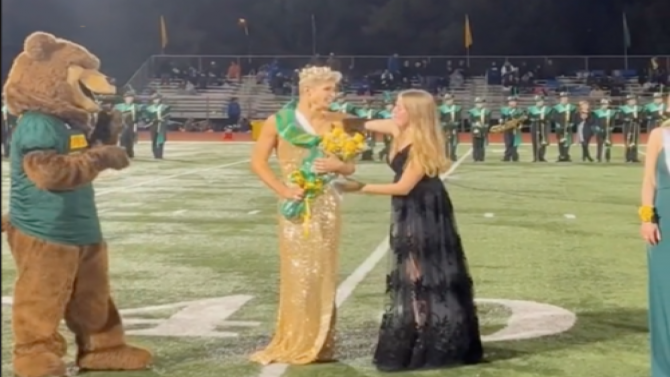 A high school student in Columbia, Missouri has just made history by becoming the first-ever male student to win the title of homecoming queen in his state.

CBS affiliate KMTV reports that Zachary Willmore, a senior at Rock Bridge High School, won the distinction, in part, because he choose to run for queen rather than king. Early in October, he posted a poll to his Instagram page asking followers to vote as to whether he should seek the title of king or queen.

“I took a really quick Instagram poll,” Willmore told KOMU 8 News. “They thought queen would look prettier on the sash. I was like, ‘You’re so correct.’ So I chose queen.”

Related: Meet the South Dakota swimmer who pushed back against homophobia to become Homecoming King

This isn’t the first time Willmore has challenged his school’s preconceived notions about gender, either. He has challenged the school dress code on more than one occasion, seeing to wear more femme or abstract outfits.

“Teachers were allowed to make the call of what was appropriate,” Willmore said. “Many times I did feel like they could target students, and I did feel targeted in some scenarios.”

A school official also confirmed that Willmore “has challenged the dress code over his time at Rock Bridge and is working with the school to develop a more up-to-date dress code.”

Reply to @poopacus thank you guys so much for all the support I’ve received I can’t explain how happy I am tonight? #fyp #queen #homecoming #gay #viral #lgbt

As for his duties as queen, Zachary posted a video to his TikTok account of his big win. It also shows the school cheerleading squad–of which Zachary is a member–rushing the field to congratulate him.

To borrow a phrase: yas, queen.