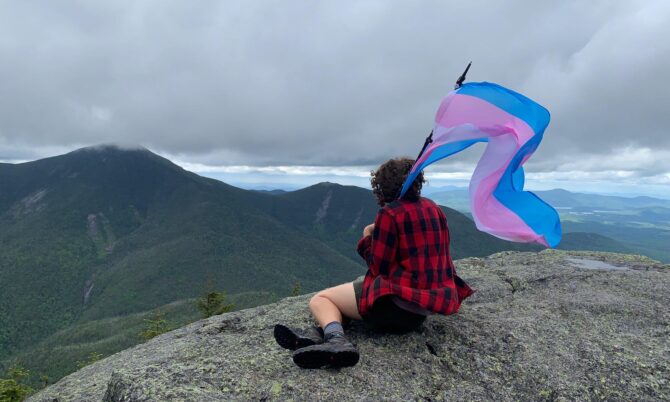 Enter Veronica Ashcroft, the sapphic trans hiker proving that nothing is too tall to conquer.

Ashcroft started her hiking journey after starting college in the Northeast U.S. and took to it with aplomb, getting accustomed to walking a good 25 miles in a day, no sweat. Well, maybe a little sweat.

She posted to a couple queer reddit forums in early May about scaling Franconia Ridge in New Hampshire brandishing a trans flag, just something fun and symbolic of overcoming hardship.

Between the positive reception, the heartfelt meaning behind the action, and an idea taken from a more nationalistic tradition (Ashcroft explains in greater depth in this masterpost on her project), the hiker decided to take on a summit series called the “Northeast 115”, flag in hand the whole way.

The undertaking is a massive one; Ashcroft is giving herself just three months to scale all 115 peaks on the list.

Her first scale was just over a month ago in Tecumseh:

In the month since, she’s trekked the trans banner up some 49 heights along the list with a smile on her face and a mission in her heart:

“Here we are, 49 peaks later and still going strong, and I can honestly say that this is one of the most rewarding things I’ve done in a long time,” Ashcroft tells In The Know.

“I don’t know how many people may be impacted by my project here, but even if just a few people are motivated to do cool things as a result, it will have been worth it.

She wrote in a recent post about the fear she sometimes feels at unfurling her flag around others at a summit, but also acknowledged that bravery in the face of others’ hostility is “one of the core reasons we have pride to begin with.”

“I believe positive visibility for queer people is one of the most important aspects of pride,” she explains. “My experiences over the last year of transitioning have shown me just how needed pride is.”

If the climber has scaled this many heights with this much joy in a month, we can’t wait to watch her journey through the rest of the list and into the future.