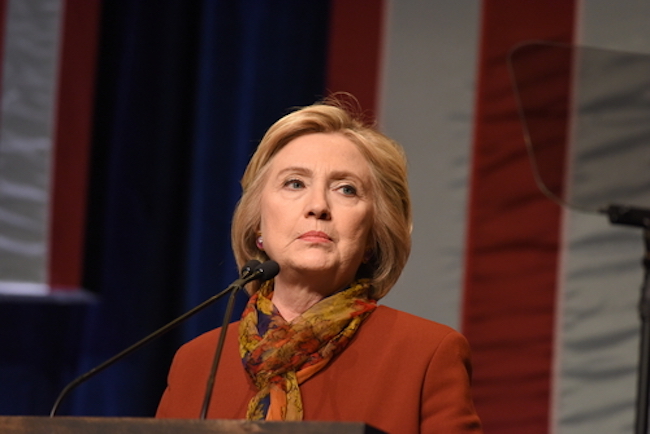 “The bill may be satirical but the message sure resonated,” she said during a meeting for Annie’s List.

Clinton said of the bill:

“When you seriously try to kick millions of women and families off their health insurance, when you believe it would be the right thing to do for your political base to defund Planned Parenthood even though the majority of America disagrees with you, that is not empowering women, that is just meanness, that is cruelty.”’

She made the statement before a crowd of roughly 2,500 attendees at a Marriott Marquis in downtown Houston.

Representative Jessica Farrar first introduced the bill as a direct response to debates around women’s reproductive health; a satirical dig at how male politicians feel entitled to make judgements on women’s bodies, abortion rights, and their use of contraceptives.

“unregulated masturbatory emissions outside of a woman’s vagina, or created outside of a health or medical facility, will be charged a $100 civil penalty for each emission, and will be considered an act against an unborn child, and failing to preserve the sanctity of life.”

Related: Hillary Clinton Gets Savagely Awkward With Zach Galifianakis On “Between Two Ferns”

The bill would also force men to have a rectal exam before they can be prescribed Viagra or receive a vasectomy:

An attending physician must administer a medically-unnecessary digital rectal exam and magnetic resonance imagining of the rectum before administering an elective vasectomy or colonoscopy procedure, or prescribing Viagra.

“A lot of people find the bill funny,” Farrar tells the Houston Chronicle.

“What’s not funny are the obstacles that Texas women face every day, that were placed there by legislatures making it very difficult for them to access healthcare.”

Farrar created The Man’s Right to Know Act after being disgusted by a bill that would make women bury or cremate their aborted fetus.