The Step Out: In the Heights

The much-anticipated, long-delayed film version of the smash Broadway musical finally arrives in theatres this week, and lucky for most of us, we can actually see the film in a cinema again. In the Heights follows the story of the Latino community living in New York’s Washington Heights, all of whom ponder the true meaning of the American Dream. For handsome Bodega owner Usnavi (Anthony Ramos) that means scraping and saving enough money to run off and open a bodega on a tropical island. When he meets the beautiful Vanessa (Melissa Barrera) a beautiful employee at a nearby salon, he begins to rethink his plans just as a blackout plunges the city into total chaos.

In the Heights follows in the tradition of musicals such as Ragtime or West Side Story that deconstruct the American dream, albeit with a more contemporary, hip-hop-based score by Lin-Manuel Miranda. Ramos gives a sensational, sexy performance in the lead, buoyed by a terrific supporting cast. In particular, Jimmy Smits and Olga Merediz give standout performances as a troubled father and kind, neighborhood grandmother, respectively. The same goes for Stephanie Beatriz and Daphne Rubin-Vega as the gossipy lesbian owners of a salon. Director John Chu stages the musical numbers with vibrant color and energy, paying homage to New York City in all its wonderful, awful glory. Teeming with joy and energy, In the Heights is, quite simply, splendid entertainment.

The film that enchanted us at Tribeca 2020 finally lands in theatres this week, and will play the Provincetown Film Festival beginning next week. Israeli, queer auteur Eytan Fox meditates on the queer generation gap in this unlikely romance. Actor John Benjamin Hickey plays Michael, a middle-aged, gay travel writer dealing with a strained marriage. On a trip to Tel Aviv, he rents an apartment from Tomer (Niv Nissim), a handsome, hard-partying gay 20-something. As Tomer plays tour guide for Michael, the two become intrigued with one another. Michael finds Tomer’s rejection of labels, promiscuity and commitment energizing. Tomer first dismisses Michael as an old, dull prude, but comes to appreciate his generation’s fight for equality and survival instincts, as well as his ability to love despite his pain.

At its core, Sublet is about two characters denying their own pain and fears, as well as the actual clash between older and younger generations of LGBTQ people. Hickey gives the kind of dynamic leading performance that has long eluded him in the movies. Nissim, in his first screen role, makes an auspicious debut. That he shows off his charisma and range is a feat unto itself; that he can hold his own opposite a veteran like Hickey makes his work all the more impressive. And, as always, Fox shows off his love for his native Israel while examining very real philosophical dilemmas facing queer men. He’s one of the most talented, interesting queer directors working today, and Sublet is the rare kind of romantic drama with characters that feel totally real.

The Hulu sequel series to Love, Simon returns this week with a follow-up of its own. As keen viewers will recall, Season 1 of the show ended with Victor (Michael Cimino) coming out to his parents (James Martinez and Ana Ortiz)…just as they announced their separation. Season 2 picks up just a moment later, as the fallout begins. Isabel, Victor’s mom, has a hard time adjusting to the idea of a gay son, particularly after he reveals his relationship with Benji (George Sear). Meanwhile, at school, Victor opts in the closet, which only puts further strain on his & Benji’s relationship, while Victor and Mia (Rachel Hilson) deal with the aftermath of their own break-up. Victor also begins to contemplate the idea of sex with Benji, which only complicates matters.

Got all that? And that’s just the first couple of episodes, too.

Love, Victor hits a stride in its second season, due in large part to the confident performances of Cimino, Martinez and Ortiz, all of who know how to play their characters with nuance and subtext. Sear also shines this season as Benji, the doting slightly more mature boyfriend. For viewers that can onboard with the show’s playful treatment of high school and romantic awakenings, Love, Victor plays like a warm blanket–one more adult and thoughtful than its big-screen counterpart. Sweet, sensitive and loaded with heartfelt humor, it’s one of the most feel-good shows airing today.

Still underwhelmed by the movie version of Rent? Stinging from Rent: Live? Disillusioned fans of the musical won’t want to miss Revolution Rent, the terrific documentary debuting on HBO Max this week. The film follows Rent veteran Andy Señor Jr. all the way to Cuba to stage the nation’s first-ever production of Rent. In a country where homosexuality and gender fluidity very frowned upon, finding performers both capable and willing to participate—not to mention a performance space that can handle the lighting and sound requirements—proves very difficult, and drama ensues.

In a sense, Revolution Rent gets closer to creator Jonathan Larsen’s original concept for the show than any movie or major production ever could. Like the characters in Rent, the performers in Revolution Rent still face violent homophobia, AIDS (one cast member tests HIV positive during rehearsals), and extreme poverty. These people aren’t polished or groomed from studying theatre at a conservatory; they have dirt in their fingernails from clawing their way through life. Señor Jr, who co-directed the film with Victor Patrick Alvarez, captures both the rocky rehearsal process and the intimate lives of his cast in emotional detail. This, folks, is the real “La Vie Boheme.”

HBO Max’s hit ballroom competition show returns for a Season 2 bow. We’ve seen the finale and—without giving anything away—can attest: it is one Hell of a throwdown. Host Dashaun Wesley also shows off his own very impressive dance moves as a preview of his own, new ballroom house, the House of Basquiat. With outrageous costumes, make-up and music, it’s a terrific closeout to a COVID-complicated season, and a great way to celebrate pride.

The Reinvention: MJ Rodriguez’s “Something to Say”

Speaking of bows, Pose may have taken its final curtain call, but star MJ Rodriguez isn’t taking a break. This week sees Rodriguez (billed under her full name, Michaela Jaé) release her new single “Something to Say,” showing off her powerful vocal gifts. The track channels the 80s pop of Debbie Gibson, the upbeat pep of Selina and the sensuousness of early Janet Jackson into a sunny pop ballad. With summer (and pride) upon us, it’s the perfect tune for walking the boulevard with friends…mimosas optional but encouraged.

Queer Nashville singer/songwriter and Martha Plimpton doppelganger (and we mean that as a compliment) Jake Wesley Rogers unleashes his latest single this week. “Middle of Love” sees Rogers channel Elton John in both musical and fashion style in a glittering video for a song about love and loss. “Middle of Love” captures the moment it seems like everything in life decides to go horribly wrong all at once…including the collapse of a longtime, same-sex relationship. Songs this tortured are rarely this upbeat. 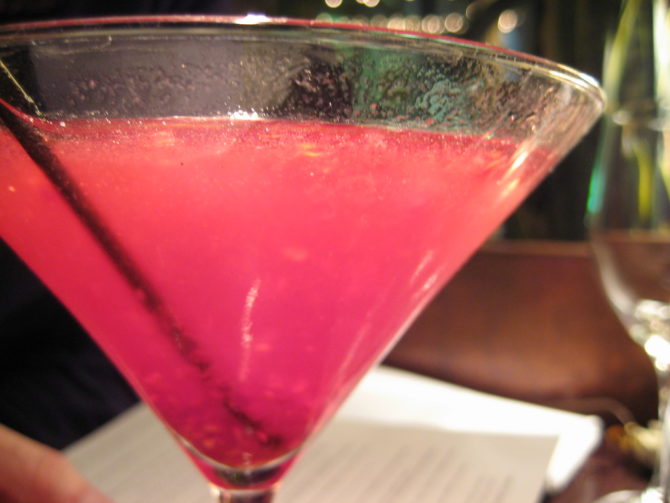 Our folks over at Crystal Head vodka sent us this recipe, our choice of libation for the week. Sweet, sour and very pink, it’s perfect for complimenting a pride outfit, a pride brunch, or just getting into the loopy headspace to rock out on the dancefloor.

Mix ingredients into a cocktail shaker and muddle. Add ice, shake well, and strain into a martini glass. For extra fun, add pink sugar to the rim.