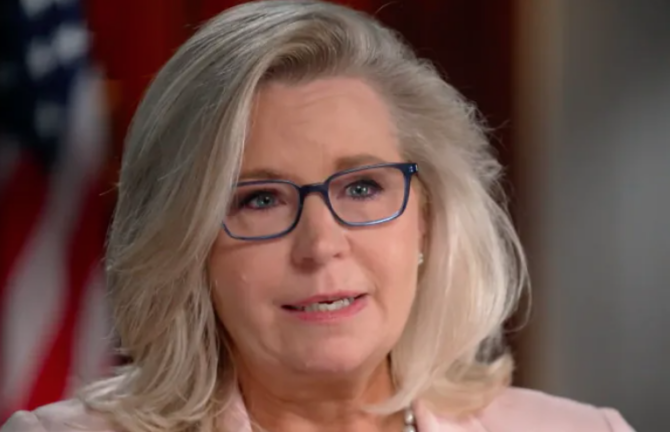 Liz Cheney, a once fierce defender of “traditional marriage,” despite having a married, lesbian sister, came out in favor of same-sex marriage in September of this year. Filmmaker Adam McKay likes to think his 2018 movie, Vice, “had something to do with that.”

Cheney famously broke with her family on this issue during her failed run for Senate in 2013, during which she opposed marriage equality. Her homophobia caused a rift with her sister, Mary, and her wife, Heather Poe.

McKay’s biographical drama starred Lily Rabe as Liz Cheney and Alison Pill as Mary Cheney, plus Christian Bale and Amy Adams as their parents, Dick and Lynne Cheney. In one of the final scenes, Dick accepts Liz’s “traditional marriage” stance, and the family splinters.

Reflecting on takeaways from Vice in a recent GQ interview, McKay said: “The big thing that was really incredible was seeing Liz Cheney come out for gay marriage. It’s one thing for her to go against Trump. But when she came out for gay marriage, there was a part of me that was like, that can’t be an accident. I saw that on social media, people went after her because of the movie. There were a lot of people saying, ‘You betrayed your sister, you betrayed your family.’ And it wasn’t by accident that we ended the movie with that. Because the one thing everyone said about Dick Cheney was he loved those daughters, and he loved that family. And in the end, the family shattered apart because of politics, because of that anti-gay stance that Liz took.”

“To see her come out for gay marriage?” he continued. “I don’t know what to make of that. I like to think we had something to do with that, but I have no way to… I know the Cheneys hated the movie. I know they really hated it. It wasn’t a passing annoyance. So I was quite proud of that. We hit him in the real way.”

While Liz Cheney has publicly stated she was “wrong” to condemn same-sex marriage, she also voted against the Equality Act earlier this year, the bill seeking to add protections for the LGBTQ community in federal anti-discrimination law.

We’re guessing McKay’s next film, the soon-to-be-released satire, Don’t Look Up, about two astronomers (Leonardo DiCaprio and Jennifer Lawrence) warning the world about an incoming meteor, won’t have the same impact. That doesn’t mean we won’t be watching when it arrives December 24 on Netflix.