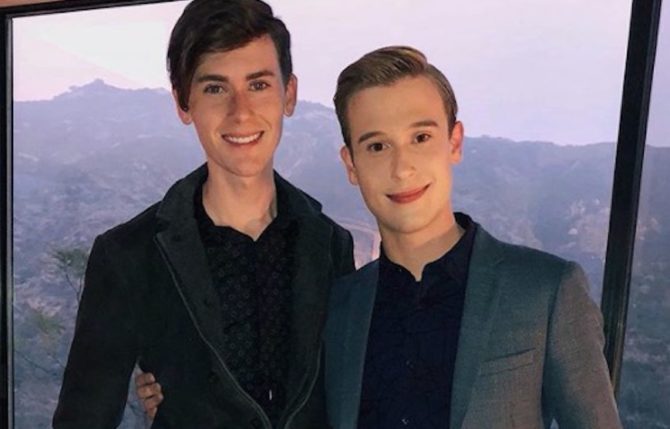 Did we say scam artist? We meant “clairvoyant medium.” (No. We had it right the first time.)

For the blissfully uninitiated, Tyle Henry is the 22-year-old host of Hollywood Medium with Tyler Henry, in which he deftly employs hot and cold reading techniques to convince people he has psychic powers.

In 2015, the Independent Investigations Group awarded Henry’s show the Truly Terrible Television Award “in acknowledgment of the extraordinary ongoing deceit of the American public represented in this television program.”

You could argue it’s all in good fun, but critics like Neurologist Steven Novella say that “working with the grieving is very tricky. The potential for harm is tremendous.” He calls Henry a “grief vampire.”

The show is about to begin its third season on E!, so who knows, maybe Henry really does have powers to contact the dead (he doesn’t), and maybe the best use of those powers is to tell Latoya Jackson who was in the room with Michael when he died (it isn’t).

So much fun this morning on @ktla5news. I am so excited for the premiere of Season 3 next week! Click link in bio for full interview. #HollywoodMedium

Whether he is the real deal (ha), delusional or just your garden variety scammer, Henry has opened up about what it’s like when his boyfriend Clint’s dead relatives “make contact.”

“One of the beauties of intuition is that if I was interacting with someone that didn’t feel right or they were kind of creeped out by what I was able to do, then they clearly weren’t the right fit,” Tyler explained to E!

“And I’m really thankful with Clint, he from the get-go understood this, was open to it and he respects it. And there’s still times where we’ll be hanging out at 11 o’clock at night and something will come through from his grandfather or I’ll get a message for his family and he understands that I kind of have to get it out so we can go about our evening.

“So it’s a little awkward but he understands how I work and when I see something I just have to share it so I can go back to focusing on whatever I was doing.

“I’m going to have to start charging him,” he joked.