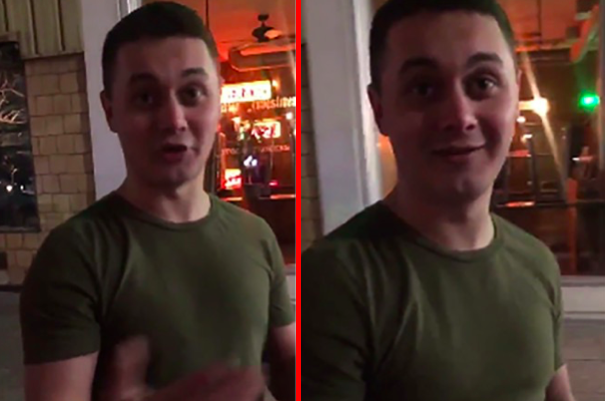 A homophobic man from Florida says he can’t afford to travel back to Utah to deal with assault charges filed against him after he was caught on tape attacking another man for being gay.

22-year-old Carlo Alazo’s legal troubles began back in February when he was charged with three misdemeanors, including two counts of assault, after attacking 29-year-old Sal Trejo in Salt Lake City.

Trejo posted an 8-second video of the brief but violent assault, which occurred on February 17, a few weeks ago.

Speaking to the Salt Lake City Tribune at the time, Trejo said he pulled out his phone to document the exchange because Alazo was “getting increasingly aggressive.”

In the video, which is disturbing to watch, Alazo asks Trejo, “Are you gay, though?”

“Oh, then you’re gay,” Alazo replies before smacking Trego in the face, knocking his phone to the ground.

In a letter filed with 3rd District Court on Friday, Alazo claimed he couldn’t make his mandatory court appearance because he had “to visit my sick grandmother who lives in a foreign country.”

Also, he didn’t have enough money to fly back to Salt Lake City.

In addition to all that, Alazo whined that he is going to have to “work as hard as possible to be able to prepare for my defense against the charges that were unjustifiably brought against me.”

He then requested his hearing be postponed another 90 days so he can save up his money and make travel arrangements.

The judge, however, was unmoved and issued a $2,500 bench warrant against the young homophobe.

Alazo is charged with threatening to use a dangerous weapon in a fight, a class A misdemeanor, and two counts of assault, a class B misdemeanor.