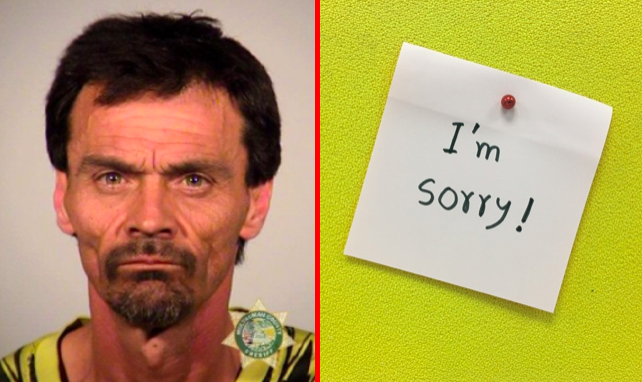 A Portland man’s homophobic behavior has caught up with him. Again.

47-year-old Scott Wayne Smith was just convicted of second-degree intimidation, which is listed as a hate crime under Oregon law, for threatening to kill a gay man who wouldn’t give him a cigarette.

It all started last August when Smith approached to men sitting on a bench outside a residence for people living with HIV/AIDS. Many of the people who live there are gay. Smith demanded the men give him a cigarette. When they ignored his request, he flew into a rage.

The Oregonian reports that Smith, who lives in the apartment complex next door, started “using homophobic language and threatened to kill the men.”

And this wasn’t the first time he had done so.

Prior to the cigarette incident, prosecutors say he threatened to bomb the building , telling the residents who lived there he was going to “kill all you people” last August.

“Everyone deserves the right to feel safe in our community,” says Deputy District Attorney Melissa Marrero. “Scott Smith took that right, and the sense of security, away from the victim as well as the other residents living at this particular apartment complex.”

Smith originally pleaded not guilty but changed his plea to no contest last week.

He was sentenced to 21 days in jail with credit for time already served, plus two years of probation and a list of other conditions, including writing a letter of apology.

“We believe this is an appropriate resolution that holds Mr. Smith accountable for specifically targeting the victim based on his sexual orientation, which is a protected class in Oregon,” Marrero says.